Milan Mann, is the President of Real Estate and Construction for BM Group. A family-owned portfolio of 16 companies, supported by a team of over 400 while based out of BC, with offices in Seattle, Portland and New Delhi. He owns his success, but the lessons he learned from his father, Balraj Mann, a well-known and well-respected businessman, are where it all began. “I am a brother and a son, and I am always trying to be the best member of the community I can be,” Milan enthuses.

Impeccably dressed in beige and gold tones from head to toe, Milan admits that he plans every detail in his life. “When I was younger, in elementary school, I used to pick out my clothes, from the shoes to the socks. I’ve always been clean-cut, decidedly organized.”

To this day, he still chooses his clothes for the next day. He says he overthinks the endless possibilities of any decision, sometimes resulting in analysis paralysis. Milan describes himself as being loyal, dedicated, and calculated. He is a loyal friend of a small circle of friends. The youngest of three children with two older sisters, he is a family man who speaks lovingly of his late grandmother, expressing care and concern for her, especially during the Covid pandemic

“Given that I work in the family business, I spend much time with my dad.” When Milan was younger, his father spent a lot of time working to provide a particular lifestyle. His Father, a Civil Engineer, was always doing so many things. “He made everything look so easy, and at first, it was very intimidating.”

As his father’s success grew, Milan would hear positive comments from people who would praise his father, then he realized his father is someone special.

Milan’s mother worked as a care-aid. Reflecting on his childhood, he now realizes how hard-working his mother was. “I am a momma’s boy for sure. She worked until 2015, when she had to have back surgery. I didn’t know how tired she was. My mom hid her struggles from us, putting the family first.

“I’m very close with my sisters.” Milan looks up to his sisters, who helped raise him and are instrumental in the fine young man he is today. “They’re both intelligent and kept me on the straight and narrow.”

Milan established The Mann Family Award in Health Sciences at Simon Fraser University (SFU), created in honor of his two older sisters, who graduated from SFU’s Faculty of Health Sciences. During his undergrad, he started the foundation, We the Team, which was developed to assist families with the financial hurdles of organized sports, including league registration fees and costs of equipment. While the foundation made impactful connections over the few years in operation, this initiative would later be folded into BMG’s more significant community contributions. BMG has the staff, time, and resources to manage these initiatives.

He also spent time volunteering at the Writer’s Exchange after-school programs. The Writers’ Exchange is a community that supports under-resourced kids and youth to build their confidence and get excited about reading, writing, and their own potential.

One of his biggest influences growing up was his high school basketball coach. “I was a small kid and wasn’t the most skilled, but he saw something in me. In grade 11, he made me captain of the team, saying, “It has nothing to do with your skill, but you’re the one person who connects the team.” 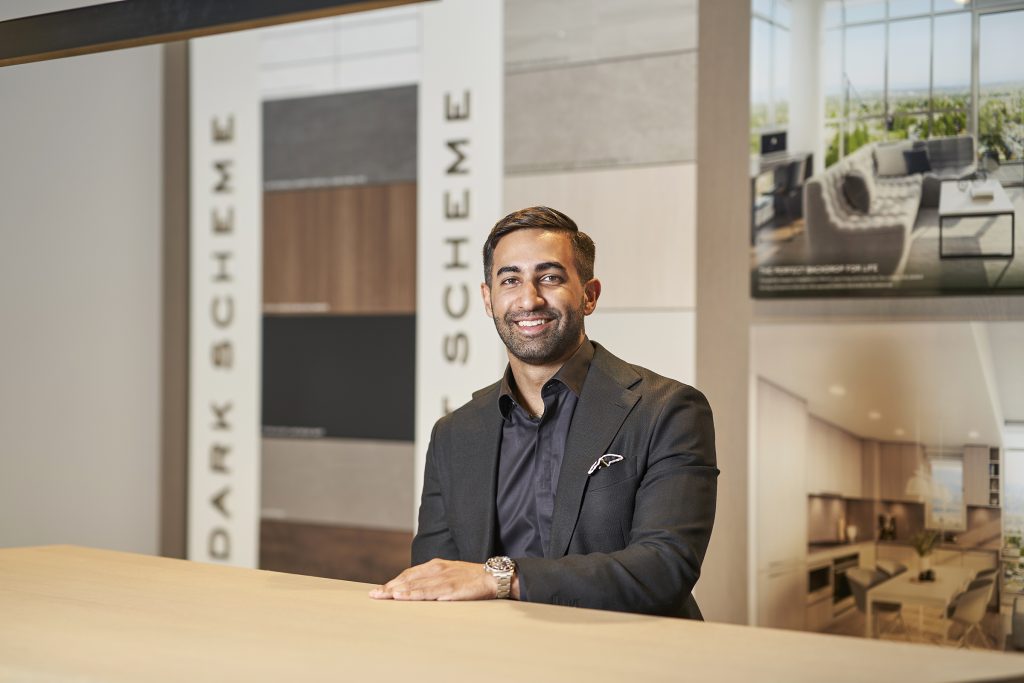 Milan has always been a true sportsman. When asked about the possible adversities he has overcome, he shares, “I don’t care for a title. That’s my dad’s company, one that I am proud to be a part of and I help wherever possible. I’ve never shied away. I am my father’s son. I’ve always been very conscious of the perception of nepotism. People might judge you for a position whether you earned it or not. I hope people recognize, “That’s Balraj Mann’s son, but he’s earned his position. I have that chip on my shoulder of having to prove myself. When born into an established family business, it’s easy to become complacent. Things are just going to happen. You don’t have to do anything.”

But he strives to become worthy of any responsibility in his work. He takes nothing for granted and works on self-development, looking toward a strong group of business families. He believes you’ll find your place if you can connect with people. “I am a member of the Young Presidents Organisation (YPO), a collection of people in BC. I look towards The Bosas, The Beedies. I strive to learn from and model my own business. Learn how they balance work and family. I’ve studied Jim Pattison.

Milan is currently in school, completing his MBA part-time.

As a company, Milan says they had faced racism, specifically when entering new sectors. “No one would help us, so we had to figure it out ourselves.”

The company cared about its employees and protected them during the epidemic.

“It was pretty draining because we have a staff of over 400 people. Are we going to have to lay anybody off? How do we avoid that? We tried our best, and no one got laid off.”

Milan advises our readers, “Be true to yourself and work hard, and you’ll end up where you want. Be cognizant of what you’re doing and why you’re doing it. Focus on one thing and be great at that. Maintain relationships. Whoever got you to the dance, you have to stick with them.” He also likes a quote from Muhammad Ali, “Don’t count the days, make the days count.”