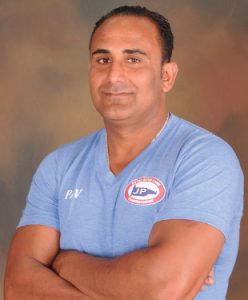 Nothing has come easy for Pav Arora, a world-class athlete, expert mechanic and an accomplished businessman. He was born in India, but came to Canada as a preteen, adopted and sponsored by his uncle. His mother and two younger sisters remained in India. It was difficult to move away from his family to come to a new country, but his widowed mother hoped he would have a better life in Canada. For most of his life, he has worked to support himself and later his family. He had also devoted countless hours training as an elite wrestler, and later, a star kabaddi player. “There were many days when I would only sleep two hours a night,” Shambhu—a nickname he picked up during his years as a kabaddi player—recalls. “I used to train starting at five am, and would continue until eight am. I’d then come home, and get ready for work, and then after work, I would spend several more hours to train. Then I’d go to my other job for an overnight shift.”

Shambhu went to high school at North Surrey Secondary. He joined wrestling at North Surrey, and during his high school years he rose to great prominence as a wrestler. He was a BC champion and also wrestled at the Canadian Nationals as well as in Simon Fraser University Elite Tournaments. Shambhu was offered a scholarship in wrestling but declined it to focus on employment.

He remembers being inspired to wrestle during his childhood in India. “There used to be a very large wrestling tournament in the village, and we would go and watch it. And from an early age my dad encouraged me to take it up.” It was also during his high school years that he discovered an aptitude for auto mechanics. Over the years, he worked at many different mechanic shops and eventually, along with a partner, purchased JP Transmission in 2013. JP Transmissions is located at 8951 152nd Street, in Surrey. The service centre employ the latest technology and expert technicians who will diagnose vehicle problems and fix them right the first time, and back their services are backed by a nationwide warranty.

Shambhu also wrestled at several local, national and international wrestling tournaments. During one of the local tournaments, he noticed that while the crowd that gathered to watch wrestling was good, the crowd watching the kabaddi events was enormous. “I remember thinking ‘wow, that’s a lot of people watching this,” he recalls. “I decided I should give that a try.” He talked to a friend of his, whose father was a former great Kabaddi player, and his friend’s father agreed to train both of them. “He treated me just like I was his son; there was no difference. I am grateful for that.”

While incredibly successful as a kabaddi player, Shambhu is quick to point out that the success came as a result of hard work. “A lot of people just go to the gym, but kabaddi requires flexibility training too. So I would also go to the field, and run up hills, do push-ups. And I ate well – I ate natural foods. Some people work hard but also party hard. I decided to dedicate myself to this sport. I started in 1997, and it took me about four years to reach the top.” And of course, all of this was done while sometimes working two jobs. He points out “you have to give something to gain something.”

“People want to train today and be successful tomorrow. But it doesn’t happen overnight. People used to tell me I can’t do this; I can’t do that. But I knew if I put my mind and heart into it – which I did – I would be successful. A lot of people tried to bring me down, but I didn’t let them.”

“Work as much as you can, work as hard as you can,” he explains. “God will notice you, and eventually God will reward you for all your efforts. I’m an example of that.”

Shambhu sometimes will still train up-and-coming wrestlers and kabaddi players. He also has a son who may someday follow in his footsteps. You can of course also find him at JP Transmissions. JP Transmissions has become one of the most trusted names in transmissions and is one of the fastest growing names in total auto care. To book an appointment call 604-589-1217 or 604-497-1217.