Whoever opens the gate to Sikh history and walks down the alley leading into the past of the Sikh community will meet a ...

Whoever opens the gate to Sikh history and walks down the alley leading into the past of the Sikh community will meet a specter, and this specter is called freedom. But the specter is not that of the Sikhs, but of the tyrants. Freedom is one of the many reasons VAHEGURU JI had sent the Sikh Gurus into the world, for it was necessary to work against dark powers and light a fire to warm human beings. To secure freedom for freedom demands courage, fortitude and struggle, and many brave men have fallen in its name: inconspicuous warriors as well as grand warriors, heroes all of them.

And this is the story of two of them:

Sahibzada Ajeet Singh Jī, the eldest son of Guru Gobind Singh Ji, was born in Paonta Sahib on January 7, 1687; the Gurus second son, Sahibzada Jujhar Singh, was born in Anandpur Sahib on March 14, 1689. From their earliest childhood on their father and some able Sikhs instructed them, besides their formal and religious education, in physical training, riding and the art of warfare. This last point especially was to turn out to reveal their father’s wise foresight, for dark shadows which would not give way to light were overcasting the Guru, his sons and the Sikh community. And as the threats were always present, hunting tigers and other wild animals in the impenetrable jungle around Anandpur Sahib was an integral part of the routine of putting weapons to the test. But how did this state of affairs arise?

Throughout its long history, India had seen many seeds of religion grow and perish. The seed of Sikhism had remained strong and began to bear fruit and grow roots deep in the hearts of human beings. More and more Hindus and Muslims turned to the young tree of Sikhism, whose growing branches could not bear tyranny or oppression and whose tender fruits tasted of a casteless society in which all are equal. Thus a steadily growing unrest grew among the Hindu kings of the hill states around Anandpur Sahib as well as among the Muslim rulers. Both of them were afraid that the steady growth of the tree of Sikhism would deprive them of their power. And so the Hindu kings started to use every opportunity to complain to Shah Aurangzeb about Guru Gobind Singh Ji. Their evil words stirred up hatred against the Guru, and they advised the Shah to get rid of him forever. And as the Shah was already hostile to the Guru he listened to them only too well and was the main influence when the Muslim rulers in Delhi, in the Panjab, in Jammu and Kashmir united their soldiers with those of the Hindu kings to form an army that was to destroy the Sikhs.

Their united forces marched on Anandpur Sahib and surrounded the fort with an impenetrable wall. Thus a siege began that was to last for seven months. During this time, the besieged Sikhs were cut off from all supplies. There was a lack of everything, food, water and medicine, which became more drastic day by day. But the besieging forces faced difficulties as well. Their abject failure had discouraged their soldiers and made their leaders lose face with regard to Aurangzeb. So they looked for a way out, carried on negotiations with Guru Gobind Singh and promised that they would not attack him if he only vacated Anandpur Sahib. To confirm their pure intentions, the Hindus took an oath on their sacred text, the Bhagavagita, and the Muslims took an oath on the Koran.

Guru Gobind Singh Ji certainly was aware that his mortal enemies would not honor their oaths. It would not make sense for them to let him and his Sikhs go after having invested so much into destroying them. But as the situation in Anandpur Sahib was hopeless, all mistrust and all doubts did not help Guru Ji. He had to take action, and so he agreed to the withdrawal.

The Guru, his family and his Sikhs left the fort with heavy hearts, but freely and without interference. After an arduous march they finally reached the banks of the river Sarsa Nadi. Here the Guru’s dark forebodings turned into certainty, for the very moment they began to cross the river, the enemy struck them from behind – viciously, cruelly and relentlessly. Sahibzada Ajeet Singh and part of the Sikh army provided rear cover to Guru Gobind Singh and his soldiers so that they could cross the Sarsa Nadi, which, however, was virtually impossible. Heavy rainfalls had turned the river into a roaring flood whose waters swept along everything that was not strong enough. Once he had made sure that his father with his troop had reached the other side safely, Sahibzada Ajeet Singh followed them through the river which had claimed the lives of many as tribute for the lives of a few.

In the evening of the following day Guru Gobind Singh, accompanied by his two eldest sons and only forty surviving Sikhs, reached the village of Chamkaur, where they moved into the fortress-like house of Chaudhary Buddhi Chand. Protected by its strong walls, they decided to face their adversaries the next day.

During the night the enemy soldiers moved closer, and by dawn they had grown into a huge army that teemed with men and animals. Screams of hatred rose from rough throats and tore the cool morning air. Weapons clanged menacingly. Horses were stomping on the ground uneasily. Trek oxen loudly roared with fear so that frightened birds ducked into their nests. The plain stank with sweat and thirst for blood.

What courage, what heroic bravery! – This is the matter from which an epic arises. 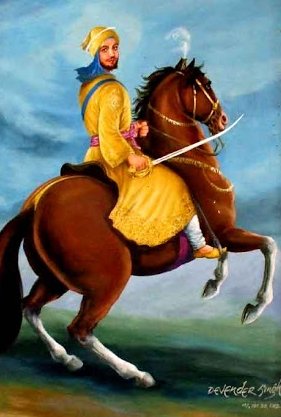 When the first group of five Sikhs left the fortress to fight the overwhelming Satans in a struggle that could only end in the arms of death, Sahibzada Ajeet Singh asked his father, who was overjoyed at his son’s courage, for permission to join the fight as well. His father embraced him, equipped him with weapons and let him ride into battle with the next five Sikhs. Thus the Guru demonstrated that his son’s life was not dearer to him than that of his Sikhs.

Sahibzada Ajeet Singh was his father’s son through and through. With the force and agility of a tiger he shot his arrows and wounded many enemies mortally. When his arrows were used up, he took up his spear, which he handled with such courage and ferocity that many enemy soldiers retreated before him in surprise and fear. Then fate struck. He had penetrated an enemy’s armor, and his spear became stuck in the soldier’s breast. The attempt to withdraw it cost him precious minutes, and so it happened that his horse was mortally wounded and fell from beneath him. Although Sahibzada Ajeet Singh could jump to safety with a courageous leap, drew his sword and killed many enemy soldiers, the enemy’s numerical superiority became too strong. A soldier used an advantageous moment and thrust his sharp spear deep into the young fighter’s body.

Mortally wounded, Sahibzada Ajeet Singh sank down on the bank of death. His eyes grew wide with astonished unbelief, and a smile curled his mouth as the Big Sleep came, took him up into its protecting arms and carried him away from everything that would not touch him anymore.

Guru Gobind Singh had watched his son’s fight from the fort and had used volleys of arrows to give him more time to face the enemy. Now he saw him fall and knew that he would not rise again as he lay among the scores of enemy dead as if asleep. Guru Gobind Singh was Guru and so he knew that VAHEGURU JI calls those to him who he wants to have close to him or who he needs in some other place. Guru Gobind Singh was a warrior and this made him be proud of his son, whose heroic death made him one of the Unforgotten. 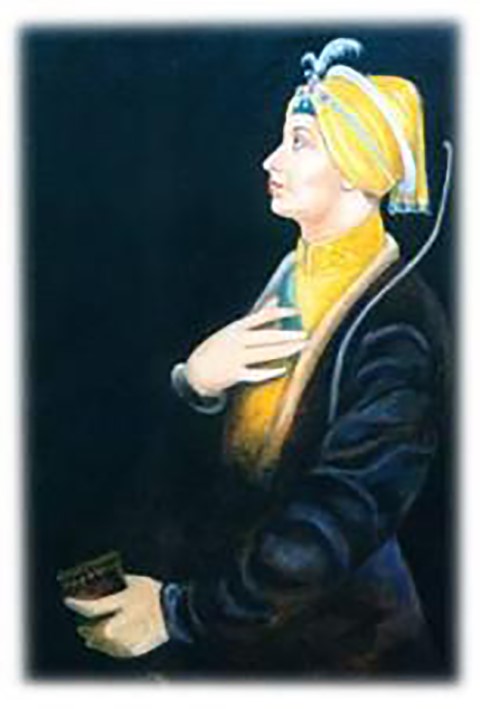 Sahibzada Jujhar Singh had watched his brother Sahibzada Ajeet Singh fighting as he stood next to his father on the fort. His brother’s courage filled him with pride and admiration. And as soon as his brother had fallen, he asked his father for permission to join the battle with the next group of five Sikhs. Overflowing with youthful zest for action, he assured his father that he would not bring shame on him. And so his father embraced him as well, equipped him with weapons and let him go.

As soon as Sahibzada Jujhar Singh met the enemy, he attacked them with the fearlessness of a lion while the Sikhs accompanying him formed a protective ring around him. His enemies could not help paying respect to his swordsmanship, for during their whole lives as soldiers they had never seen a youth who handled his blade so skillfully.

Arrows, spear and sword – Sahibzada Jujhar Singh fought expertly with all weapons. But the blows of his sword above all were deadly strong and decapitated many enemy soldiers. The Sikhs accompanying him equaled his courage and his skill, but when the battle had reached its climax, more and more enemy soldiers approached from all sides, broke the protective ring around Sahibzada Jujhar Singh and mortally wounded him. The world had been laying open to the youth, but night came early to him and made him another one of the Unforgotten as he grasped his brother’s hand.

He had been waiting for him. Together they went to the place of which there has never been given an account. Guru Gobind Singh Ji had lost two sons within a very short time. He had shown his Sikhs and the world that he loved his own flesh and blood no more than his faithful devotees. And the Great Understanding he had made him give the place of honor not to his mourning, but to his love for VAHEGURU JI.

Sahibzada Ajeet Singh Ji and Sahibzada Jujhar Singh Ji have gone down in the history of the Sikhs as martyrs, as Unforgotten Ones. Because of their heroic deeds they are respectfully called Baba in spite of their youth. Some wish to die a martyr’s death for VAHEGURU JI and Sikhism. May nobody desire this, for desires may become true, and some of those wishing for a martyr’s death will not be able to live up to this high demand.

The alley of Sikh history has been flooded with blood and infinite suffering. Maybe there are other things to wish for. 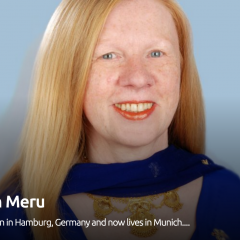 Elisabeth was born in Hamburg, Germany and now lives in Munich. She writes short stories, journalistic pieces and poetry.