The Silvertips – ranked second in the Canadian Hockey League in the most recent top 10 polls – took away any open space, blocked countless shots and generally frustrated at the Vancouver Giants at every turn in skating to a 4-1 victory on Friday night in Western Hockey League action at Langley Events.

The full Everett Silvertips’ experience was on full display.

The Silvertips – ranked second in the Canadian Hockey League in the most recent top 10 polls – took away any open space, blocked countless shots and generally frustrated at the Vancouver Giants at every turn in skating to a 4-1 victory on Friday night in Western Hockey League action at Langley Events.

Everett has yet to lose in regulation, improving to 13-0-0-1 and have allowed just 24 goals in 14 games played. Vancouver dropped a third straight game to see their record fall to 7-6-1-0.

“It was like a playoff game. We probably could have got more pucks on net and in the end, I think that was the difference,” said Giants coach Michael Dyck. “They are a tight-checking team, so you don’t have much time and space. Again, the opportunities you have, you have to take advantage of.”

Despite the three-goal margin of victory, it was a 2-1 score with less than five minutes to play before Everett’s Olen Zellweger scored an insurance marker and then Austin Roest capped things off with an empty-net goal just before the final buzzer. 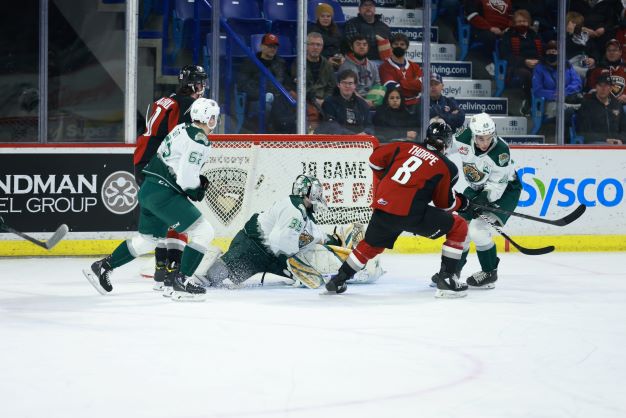 Adam Hall had the lone Vancouver tally, redirecting a pass from Payton Mount at the 8:02 mark of the second period to make it a 2-1 game. The Silvertips’ Aidan Sutter opened the scoring in the first period before Matthew Ng doubled the lead early in the second.

Both teams were 0-for-2 with the man advantage, and that included 41 seconds of a two-man advantage for the Silvertips in the first period. Final shots on goal were 25-19 for Everett and the 19 shots on goal marked just the second time in 14 games the team failed to crack the 20-shot plateau.

Up Next: The Giants, in conjunction with Langley Events Centre and White Spot, are excited to host White Spot Legends Night on Saturday, November 20 when they welcome the Victoria Royals to LEC at 7:00pm. To help celebrate 50 years of the Western Hockey League in British Columbia, the Giants will have the Memorial Cup in the building along with some notable WHL/WCHL alumni. Some of the scheduled guess include Stan Smyl, Ryan Walter, Mark Lofthouse, Ernie “Punch” McLean along with Vancouver Giants Memorial Cup winners Brett Festerling and Kendal McArdle.

“50 years ago, the Estevan Bruins relocated to New Westminster giving B.C. their first WCHL franchise, along with the Vancouver Nats and the Victoria Cougars.  This weekend we’re excited to celebrate that history and welcome some of the great personalities associated with that era – Many of which helped blaze the trail for future BC-based teams to find championship success in the WHL,” said Vancouver Giants Sr. VP Dale Saip.