Yama is one of the Legendary Ustad Fateh Ali Khan students from Patiala Gharana. He is passionate about Classical, Ghazal, and Bollywood music and he enjoys singing Bollywood songs. He lives his life with his favorite quote: “Life is an event. Make it memorable.” 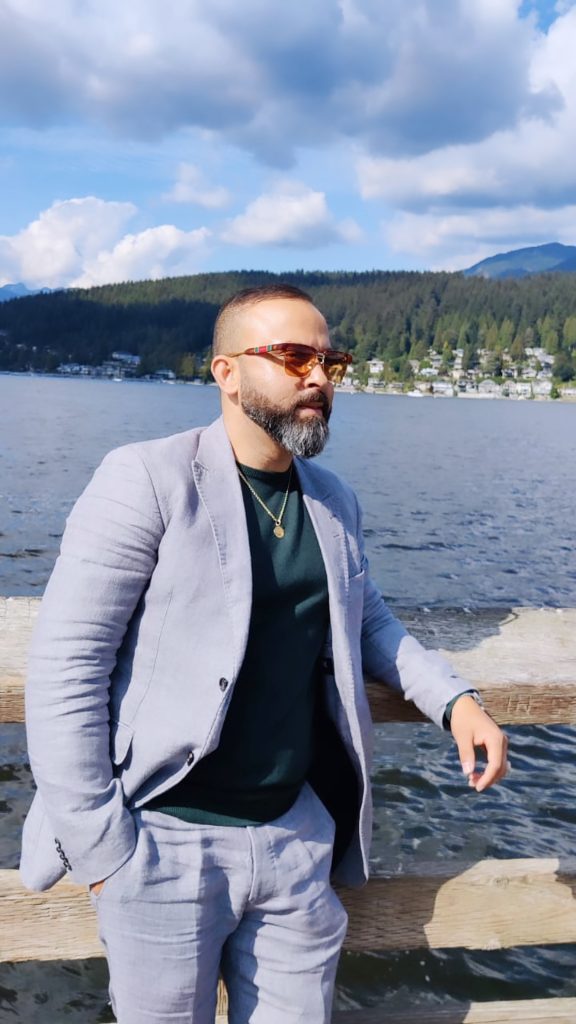 Yama Sarahang is the Founder and President of Sarahang Entertainment, grandson of The Legendary Saraj E Musiqi Ustad Mohammad Hussain Sarahang, and son of the revered Ustad Eltaf Hussain Sarahang. Yama Sarahang was born in August of 1984, in Kabul, Afghanistan. He left his country when he was 4 years old and moved to India with his entire family in 1989, and he lived in India for 10 years. In 1992, Yama went to Mumbai city with his family to meet and greet some of Bollywood’s Legends, such as Mr. Dilip Kumar Saab, Amitab Bachan, Sri Devi, Madhuri Dixit, Jackie Shorff, and many more. Yama Sarahang Moved to Canada in 2000 and continue his education in Toronto, Ontario. Yama went back to India in the year of 2012. His father was invited to the Music Festivals by Indian Government in Delhi, Jaipur, Chandigarh, Mumbai, and Pune. While Yama was in Mumbai he met some of the greatest Bollywood Legends from the music industry. In 2013 Yama moved to Vancouver from Toronto with his wife and his first born daughter Dunya. British Columbia is his favourite province in Canada. Vancouver has become his forever home. Yama continued his post-secondary studies and graduated with majors in Business Management and Digital Marketing. Yama believes the people of British Columbia are one of the kindest, most ambitious and you find many successful individuals reside in Vancouver, BC. Yama is one of the Legendary Ustad Fateh Ali Khan students from Patiala Gharana. He is passionate about Classical, Ghazal, and Bollywood music and he enjoys singing Bollywood songs. He lives his life with his favorite quote: “Life is an event. Make it memorable.” This quote becomes a foreshadowing of what will become his passion later on in life. The Lower Mainland, although a culturally rich area, still has a ways to go when it comes to bringing these cultures together. As an Afghani Canadian who grew up in Indian culture, I feel it is my duty to bring the raw and natural talent of our community to the forefront of our young people’s attention, while reminding and rekindling the memories of our older generation of peers. Yama’s wish is to contribute back to the music industry. Coming from a family where music runs in their blood, Yama launched his own Entertainment business. It paved the way to share his vision, bring the highest caliber of entertainment back into the industry, and share this experience with the audience. When you ask Yama “Why this? Why now? Why you?” He put it plainly; “From generation to generation, our love of music has been passed along our familial gathering, memories, and dreams. I feel it is my honor to ensure that my kids, the children of those who’ve grown up in the same culture, and those who wisht to learn more about our musical history can have a place to pass on the torch and keep the flame burning.” Well said, Yama! From a long line of historical contributions to the Indian and Afghani music community, his aim is to take his entrepreneurial skills and continue his family’s legacy and love of music. He believes music has no boundaries, religion, language, ethnicity, or political standpoint. His events bring together a wide array of music and entertainment lovers in a neutral space.

His most recent endeavor included the incredible musical talent of his father, Ustad Eltaf Hussain Sarahang. A whole house of attendees came to witness the masterful night, and it elicited nothing but praise from them. His event sponsors ensured this would not be the last of significant events hosted by the youngest contributor to the Sarahang Legacy. Yama brings a new perspective to the music community. It not only delivers a wide range of cultures together but shares a timeless love for music and entertainment that transcends generations of listeners and viewers. We can say that this is another strong pillar in the community of young devotees to music. The enthusiasm stays alive on the foundation of this shared love through immersive entertainment. Those around Yama are excited to continue enjoying the journey that will come to be with his new business and entertainment venture—Sarahang Entertainment. Yama@SarahangEntertainment.com