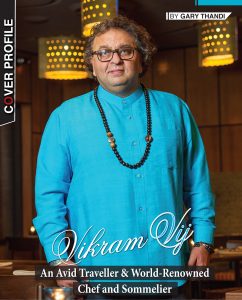 It’s hard not to be impressed by Vikram Vij—and to feel a little intimidated at the prospect of meeting him. He is a Jack of all trades, and a master of all!

The chef has been a Dragon on CBC’s Dragons’ Den, investing in aspiring entrepreneurs’ businesses. He hasjudged popularcooking shows like Top Chef Canada, Chopped Canada and Recipe to Riches. He’s evenhosted anonline cook-along – Cook Live With Vikram Vij – where viewers could cook along with the chef from home and send him questions. Vij is the co-author of two cookbooks – Vij’s Elegant and Inspired Indian Cuisine and Vij’s At Home: Relax, Honey. He is also a regular contributor to several publications. He ispassionate about sustainable foods, as well as arts and education – supporting the Museum of Vancouver and the Vancouver International Bhangra Celebration Society and donating $250,000 to UBC to renovate a training kitchen now calledVij’s kitchen. He often travels around British Columbia and Canada, giving keynote speeches about entrepreneurship, sustainability and much more. He has a line of take-home frozen foods – Vij’s at Home – that is sold in grocery stores across Canada.Vij has a PhD (SFU awarded him an honorary Doctorate of Law in June 2015) andis an avid traveller and world-renowned chef and sommelier.

Despite this list of accolades, it only took seconds for me to realize my conversation with Vikram Vij wasn’t going to be intimidating. He greeted me warmly at his restaurant as if welcoming a guest into his home and quickly offered me a cup of steaming chai. I watched as Vij took time to acknowledge his employees who were fastidiously preparing for the day’s customers. It was clear he treats them more like members of his extended family than employees.

“This magazine is called DRISHTI, which means one’s focus, or goals.I want to talk about what drives me – my DRISHTI,” Vij explains.

So we did just that. We discussed the chef’s passions and inspirations for well over an hour – during which time the man who wears so many hats and has so much to do—gave me his undivided attention. It was an inspiring chat that offered me a glimpse into the mind of a creative chef, author, speaker, television personality, and entrepreneur.

“I was born in Amritsarand many of the conversations around the house when I was growing up were about food,” Vijsays. “Food was on my mindat a very young age. My grandfather, who loved to drink scotch and listen to Gazals, would joke, saying ‘Someday, when you’re big, you can open up a restaurant, and I’ll be the bartender. That way, I can drink for free!’”

By age 20, Vij was studying hotel management at a high-end hotel in Austria and well on his way to achieving his grandfather’s dream. But it wasn’t his dream.
“I realized then that as much as I enjoyed working on the floor, I loved being in the kitchen much more,” he says.

Vij was in the country on a working visa and explainedhow temporary employees were sometimes treated unkindly. He came to Austria on a six-month visa, but didn’t know what would happen after that. The hotel was free todismiss him and anyone in the same situation after the initial six months.

“I was sometimes belittled. I remember crying,” Vij says.“But I was willing to endure the abuse to pursue my goals.”

Vijadmitstheexperienceonly made him stronger – more resilient. And his perseverance paid off when Ivor Petrak – the longtime general manager of the Banff Springs Hotel visited the restaurant he was working at in Austria. Vij impressed him so much with a creative take on goulash that Petrak offered him a job in Banff. Vijcameto Canada in 1989.

“When I first arrived, I thought, ‘This is a beautiful country; this is where I want to live.’”
He later moved to Vancouver, where he discovered the Punjabi Market and re-embraced his Indian heritage.

“For many years I wasn’t proud to be Indian,” he says.
Overt racism – like what he experienced in Austria – as well as more subtle forms, had forced Vij to repress a large part of himself.

“Experiencing the sights, sounds, smells, and flavours of the market and restaurantsin Vancouver inspired me. I thought, ‘I love this! I want to cook Indian food and create awareness about my country’s cuisine and culture.’”

Vij would shop for spices at the market and return home to cook – some dishes from his childhood and others, his own creative concoctions. While in Austria, Vij dreamed of opening his own restaurant. Vancouver was the perfect place to put his dream into action. But borrowing money to start such an endeavour wasn’t easy. Hedidn’t want to serve butter chicken like all the other Indian restaurants. He wanted to cook modern Indian food to showcase a wide range of flavours. Investors were initially very skeptical.

“People told me no one would want modern Indian food, but my focus – mydrishti –never changed.”

With support from his family – which involved his mom transporting curry to the first Vij’s location on Broadway on the bus – Vij was able to make his goal a reality.

More than 20 years later, the chef owns three restaurants – Vij’s, Rangoli and My Shanti. Vij’s opened in 1994 and Rangoli, a casual restaurant and market that also serves lunch, opened next door in 2004. Both restaurants are co-owned by Vij and Meeru Dhalwala who is a chef, author and also Vij’s wife. In 2014, Vij opened My Shanti in South Surrey. It’s a solo venture he took on to showcase the amazing flavours he has encountered in his travels through India and other countries.

Vij also has two food trucks and a 28,000-square-foot factory for his take home food line, which is sold across Canada.But he doesn’t want this article to be a list of his restaurants and accomplishments; he wants to focus onhis drishti because, without it, he believes none of those accomplishments would be possible.

“The food at our restaurants is cooked with love and passion. That’s my drishti,” he says. “I cook dishes I would eat at home and my goal is to share them with as many people as possible.”

He wants everyone to know that Punjabi dishes aren’t the only type of Indian food.
“I’m very proud of what Punjabis have accomplished, but India is not only Punjab,” Vij says.“The country is so diverse. The food, flavours and spices are different in every region.” To the people who think Vij is trying to do fusion food, he says, “My food is like a democracy that represents the diversity of India. That’s my interpretation of what fusion means.”
All of the chef’s restaurants share the same philosophy when it comes to food: keep spices and cooking techniques Indian while using meats, seafood and produce that are locally available.

Vij’s, Rangoli and My Shanti do not take reservations. It’s another policy that Vij instituted from the beginning. He says it was inspired by Mahatma Gandhi who believed everyone is equal. Vij feels the same way. His website states, “We have a first-come, first served, no reservation policy. Everyone’s a VIP, as long as they love Indian food. Come relax. Come with people whose company you enjoy.”

Vij sees food and art as uniting forces.
“Cuisine and music will solve all problems. They unite us,” he says.
The women in Vij’s kitchens are all immigrants who gain a sense of empowerment through working together in a supportive environment.

“There are only women in the kitchens at Vij’s and Rangoli,” he says. “This way they can bond and be themselveswithout any male influence.”

They are not necessarily trained chefs, but have the passion and love for cooking that is needed for the job.

For Vikram, food is a gateway for realizing other passions too.
“Food led me to embrace my culture. If we Indians are not proud of our culture, nobody else will be,” he says, adding that the same rings true for Canada. “We have to be proud of our farmers and food purveyors and the diverse culturesin this country.”

Vij says his restaurants have never accessed large food distribution systems.
“People ask, ‘How did you get into sustainability?’ I say, ‘I didn’t get into it. It was already there. It was already part of my culture,’” referring to how, in India, people cook dishes using only local, fresh ingredients.

So what’s next for Vij, who seems to have already done everything? His goal is to eventually bring his modern Indian cooking to India. He will also continue to involve himself in any endeavor that creates awareness of Indian food.

Vij’s is located at 3106 Cambie street, Vancouver; Rangoli at 1488 W 11th Avenue; and My Shanti at 15869 Croydon Drive, Morgan Crossing, Surrey. For more information about the restaurants, the cookbooks (Vij’s: Elegant and Inspired Indian Cuisine and Vij’s at Home: Relax, Honey) and everything else Vij, visit www.vijs.ca or myshanti.com.