BMW Vision i8 M Next concept is still undergoing a gestation period with a launch time of 2023. The reason for the delay is the prolonged development of this next-generation hybrid super-sports car supercar.

“The total power output is estimated to be 591 horsepower, but there will be no surprise if BMW tries for a 600hp engine or an even more powerful variant.”

BMW Vision i8 M Next concept is still undergoing a gestation period with a launch time of 2023. The reason for the delay is the prolonged development of this next-generation hybrid super-sports car supercar. The current model of the BMW i8 does need to keep up with premium performance hybrid sports car competition, and BMW wants to ensure the new car meets all its standards. Concepts models of the new BMW i8 M reveal a severe, futuristic body. Ultra-low, streamlined, and sleek, it’s not pretty- but more dramatic and aggressive, it may change in the form before we get a complete production prototype. There will be increased use of carbon fiber in the body and a stiffer, more robust platform and chassis.

The BMW i8 we can look forward to having a massive increase in power. It will have a more extended all-electric driving range, and a more capable chassis to replace the current i8 M. The i8 M—(It might even get a new name) will not be a revamp, but an all-new car for the 2024 model year, with a possible soft launch in 2032. It is also rumored there will be both a fixed-roof coupe body style and a convertible roadster.

“On the outside, the new i8 adopts a much more M1-like wedge shape, with i8 touches such as the horizontally split rear fenders, plus contrasting textures and colors.” 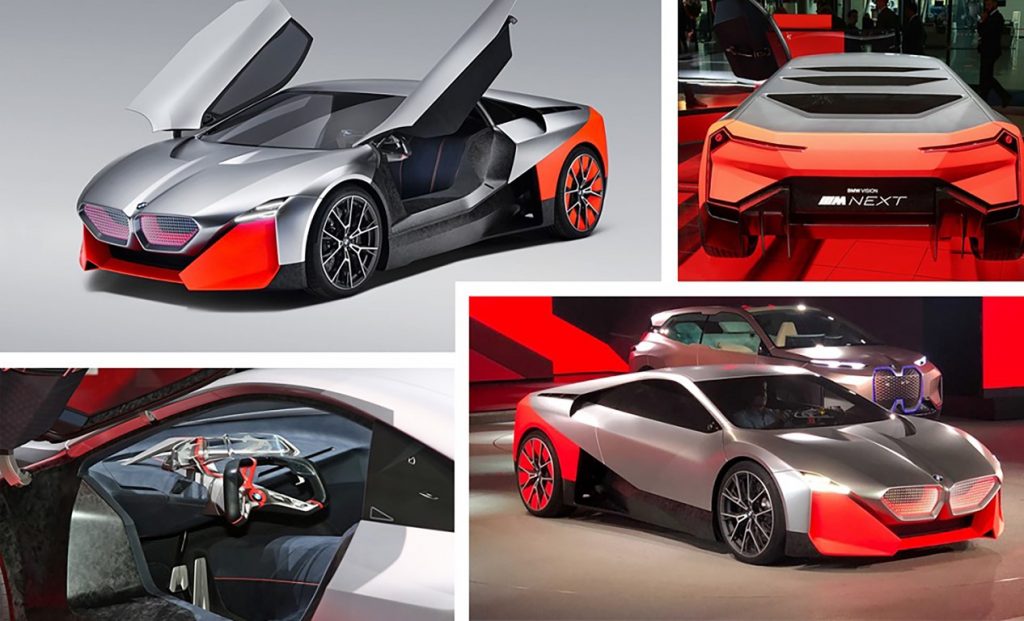 On the outside, the Vision M Next adopts a much more M1-like wedge shape, with i8 touches such as the horizontally split rear fenders, plus contrasting textures and colors meant to convey i8 lines at the front fenders and the side sills into the rear deck. It is unknown if the upwards opening doors will resurface or if there will be conventional side opening doors.
The current hybrid i8 is based around a 1.5L, 3-cylinder turbo engine backed by dual electric motors. The i8 M Concept switches to a 2.0L turbocharged 4-cylinder engine paired with dual electric motors. The gasoline engine will be driving the rear wheels, with the electric motors providing backup and boost for the front and rear axles individually. The total power output is estimated to be 591 horsepower, but there will be no surprise if BMW tries for a 600hp engine or an even more powerful variant. Electric range performance is still unclear, but it is expected to significantly improve the current i8. The new i8’s paltry 28 km electric driving range may be replaced by a claimed 96 Km’s for the new model. Whether this will be due to a larger battery or more capacity in the current 11.6-kWh battery pack remains to be seen. The extra power and range mean the new i8 will be competitive with rivals such as the Acura NSX, Lexus LC500h, and Polestar 1.

If you were wondering why BMW did not go the full-electric power route, BMW R&D boffins say the total battery weight went over the limit for performance; hence the hybrid setup remains. On the efficiency side, BMW may fit a battery with a capacity well beyond the 11.6-kWh battery in the current i8. More information will be available regarding the i8 M’s battery, range, and charging capability closer to the car’s on-sale date.

In addition to improving the electric driving range, the i8 M will offer slightly better fuel economy ratings than the current i8, despite an anticipated improvement in acceleration and driving performance.

Interior-wise, there will be new materials, cutting-edge features, and a new look to the design and dashboard. No change to the storage and cargo capacity, but a front trunk may be on the cards. In the Vision M Next concept, BMW showed off a futuristic take on infotainment that the company calls the “Boost Pod;” it consisting of several curved glass displays and a head-up display for driver information and infotainment

There’s no fixed date for a production release of the i8 M, although BMW is said to be working toward a release in late 2023 for the 2024 model year. Of course, plenty could change in that time, and the vehicle that finally hits the open road may be very different. The Canadian market can expect to see a price of over $200k and possibly considerably more.