Many Sikhs are familiar with seeing images of fierce Singhs pasted onto the walls of Gurduaras (Sikh places of learning and worship). Everyone connects differently to the legacies of these brave and valiant Sikhs. Let us take a moment to transport our consciousness back into the world of Banda Singh Bahadar and extend our sense of inspiration from one of the most powerful narratives in Sikh history.

Many Sikhs are familiar with seeing images of fierce Singhs pasted onto the walls of Gurduaras (Sikh places of learning and worship). Everyone connects differently to the legacies of these brave and valiant Sikhs. Let us take a moment to transport our consciousness back into the world of Banda Singh Bahadar and extend our sense of inspiration from one of the most powerful narratives in Sikh history. Well, who was Banda Singh Bahadar? Many know Banda Singh Bahadar to have been an ascetic, warrior, abolitionist, but perhaps most of all, he was a love-filled, inspired Sikh. One can carefully narrate the experiences of Banda Singh, as Dr. Ganda Singh so artfully does in Life of Banda Singh Bahadur (1935), or one can allow themselves to be moved idealistically by the devotion and bravery of this faithful Singh.

This essay will explore how Banda Singh Bahadar resonated with my most intimate understanding of faith. Banda Singh’s fearlessness, leadership, and piety were traits that every Sikh must unravel and connect to for themselves. There is dedication in Banda Singh’s story and heartfelt righteousness that invigorates the spirits of any Sikh touched by it. This is where my connection begins, with this veneration.

Today, our daily anxieties and lack of trust in Hukam (Divine Command) have left us fear-ridden, unable to enact true change because of the heaviness in our hearts, in our minds. In the case of Banda Singh, the spiritual vibrations were far more potent and inspiring. Banda Singh was ready to be slain for his people; there was no ‘I’ within him, no room for the afflictions that plague us today. Dr. Ganda Singh writes of Banda Singh’s power and prowess as he describes the achievements of the warrior:

“Next to the Guru, Banda Singh was the first person to place before the Sikhs a practical demonstration of staunch nationalism and teach them to sacrifice themselves smilingly at the altar of the Khalsa. The very thought of the noble example of the great martyr and his companions has contributed to elevating the minds of his people, who have, in turn, supplied the pages of history with still nobler examples. Through him, the path to conquest was discovered by the Khalsa. He was the first man to deal a severe blow to the intolerant rule of the Mughals in the Punjab and to break the first sod in the conquest of that province by the Sikhs.”¹

In Banda Singh’s conquests, I sensed an immense magnitude of Akal Purakh, (Timeless Being); on one side imperial violence and on the other, Banda Singh changing the course of history for his people. Beyond the temporal concerns of the intolerant Mughal rule, it was fascinating that Banda Singh was so motivated by Sikhi, that he allowed himself to become a vessel for his people. His physical body was merely bidding out its time, but his fierce spirit was to be felt for generations to come. Banda Singh was meant to carry the Sikhs through this moment in history without fear, without hate. This was the magnanimous spirit of the Khalsa riddled through the body of Banda Singh. Such was his bravery and fearlessness.

Leadership can only be trusted with those courageous enough to undertake Seva, (selfless service), Banda Singh had a profound love for Sikhi which oriented the sacredness of his allegiance to the people. In my reading, I dare not forget that this is what drove his works. He was generous and helpful to those around him, which made him step rather effortlessly into the role of a protector. Dr. Ganda Singh provides a glimpse of the nobility of his character as he says:

He [Banda Singh] now publicly proclaimed, by the ‘waving of a scarf,’ that he undertook to protect the poor and the helpless against all professional robbers and political tyrants and that he expected no reward from the people in lieu of the service rendered except the simple necessities of life, such as rations and ‘milk and curd.’ He further invited people into the Khalsa Brotherhood and promised them a share in the conquered lands.²

Banda Singh’s most notable accomplishment was abolishing the Zamindari system, a system of landholding and tax collection. He concerned himself with justice, which moved him to free those living under violently oppressive systems. Banda Singh exemplified Miri-Piri, (political-spiritual sovereignty) in the way that he lived his personal and political life, there was no disconnect. Not only did Banda Singh imagine a Khalsa Brotherhood, he persevered to achieve a sustainable and temporal model for it. He was liberated by his fearlessness and brought that spiritual energy to the Sikh people. Moved by a sudden and overwhelming realization, I understood through Banda Singh, that only truly liberated beings can liberate others. Such was the valor and commanding presence of Banda Singh.

Perhaps the most resonating force was reading the story of Banda Singh as he comes to life as this humble yet devoted Singh through Dr. Ganda Singh’s retelling. Often, we overlook the very core of Sikh military conquests and paint them as wholly anti-imperial endeavors–which they undoubtedly are–but there is something more transcendent and captivating at play as well. Dr. Ganda Singh describes Banda Singh’s transformation:

Banda Singh leaves for the Punjab Tasting the Amrita of Guru Govind Singh, putting on his consecrated steel-his sword dangling by his side, and his iron bracelet on his arm, and adopting the title of ‘Singh,’ his slumbering energy was resuscitated, and, from an inert ascetic, Banda Singh was truly transformed into a lion, ready to conquer or die in the name of his Master.³

While Dr. Ganda Singh quite eloquently transports his readers to the inner world of the Sikh spirit, I am also duly reminded of what it means to operate in piety and reverence through the inspirational life of Banda Singh. What does it mean to walk in the path of a lion? To die a death of a martyr? Does every Sikh receive this kind of consciousness? Is this a sentiment that is innate within us? Oftentimes, these just feel like big celestial words and we can find ourselves distancing ourselves from the larger implications and responsibilities of being such high-vibrational beings. However, my understanding has deepened significantly after reading more about Banda Singh since I was reminded of our temporality and our humanness just as much as our saintly and warrior-like proclivities. A realization dawned on me: perhaps anyone can encapsulate Banda Singh’s spirit within them, anyone can be just as affectionate, humbled and colored in the love of Akal Purakh. It only takes a dutiful intention and the True Guru’s Grace.

The story of Banda Singh has brought me closer to understanding the deepest essence of devotion and piety. Regardless of the worldly categorizations, placing him as a conqueror, leader, commander; one must be careful not to forget what he was above all–a Guru’s Sikh who was above all guided by the fierce love of his Master–Guru Gobind Singh Sahib. 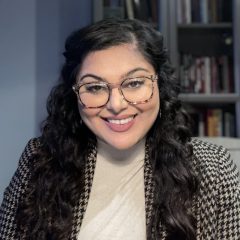 Kiranjot Kaur is the Associate Editor at the Sikh Research Institute. She is pursuing her Ph.D. at York University.

She is an academic, writer, and educator and currently serves as a Teaching Assistant in the Humanities department at York University. Her doctoral research focuses on bodies of literature relating to post-secular and post-colonial theories and ideas in the philosophy of religion.

She finds strength and inspiration through Sikh principles like sangat and seva and strives to reinvigorate academic spaces with divinely inspired passion.

Currently, she is writing her first book on post-secularity and spirituality from a Sikh lens and is actively publishing essays through other open-access platforms. When she is not writing or teaching, she enjoys baking, spending time with her family, and planning her next travel adventure.

Kiranjot Kaur resides with her family in Canada.