Baj in the Sikh Culture and Memory

This essay locates and contextualizes the hawk in foundational Sikh texts, history, and lifestyle. It also connects how Baj in Khalsa tradition affects the Sikh psyche when the people see it.

Baj or Baz (also bāj/baaj or bāz/baaz) refers to a hawk. Baj is often referred to as a falcon too. But according to ornithologists, Baj is a northern (earlier eastern) goshawk. Its scientific name in Latin is Accipiter gentilis. Accipiter is the genus for a hawk from “accipere,” which means “to grasp.” Gentilis is the species that means “noble” or “gentle.” Goshawk is often considered a “true hawk.” Consequently, Baz is a hawk.

Bhai Gurdas references Baj three times in Varan; they are quite instructive:

Seeing the Baj, the birds do not stay nearby; they run so fast and still cannot find a place to hide. (Pauri 12, Var 5)¹

Seeing Baj, all the birds in the forest leave their spaces and start running away.

Bhai Nand Lal Goya (1633-1713) in Tankhahnama (also known as Nasihanama; verses 56-62) references Baj when Guru Gobind Singh Sahib proclaims:
Nand Lal, listen to this truth:
I will establish the Raj (Sovereignty).
The four categories will become one category,
I will recite Vahiguru (Awe-Wisdom) recitation.
[They will] mount horses and fly Bajs (hawks),
The Turks (empire) will flee seeing them.
I will make one fight a hundred and twenty-five thousand.
I will free those Singhs (warriors) who ascend (die).
The spears will wave, and the elephants will be caparisoned,
The nine-instruments will resound from gate to gate.
When a hundred and twenty-five thousand guns will discharge,
Then the Khalsa will be victorious from wherever the sun shines and sets.
The Khalsa will rule and no one will be a dissenter,
All will unite after exhaustion, those who take refuge will survive.⁴

Goya captures the Guru’s open declaration of freedom from anything that binds people, from tyranny of the old religions to the political orders of the time. Towards that end, the Guru transformed people, disrupted systems, and established sovereignty. And Baj was part of that Raj! 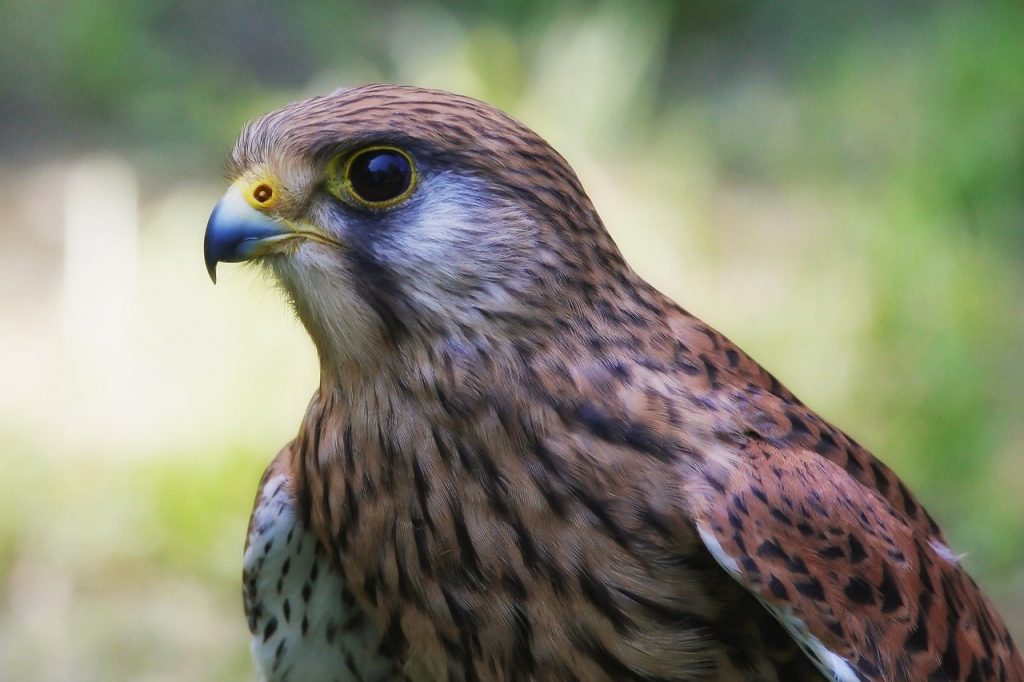 In South Asia and the Middle East, kings and emperors kept hawks as a sign of prestige and aristocracy. In the Mughal period, goshawk – Baj – was the most prized hawk.

The Goshawk was considered noble and its prowess in falconry highly-esteemed. Its name also pertains to an era when only the nobility could fly this species. Reckless in pursuit, it focusses on its quarry regardless of natural or man-made obstacles. It is this feature that has made it a favourite among falconers. The powerful female was traditionally trained in the Punjab to take large prey such as hare, Macqueen’s bustard, crows, owls, herons, ducks, geese, even cranes and large game birds such as partridges, junglefowl, pheasants, in Sind even gazelles.⁵

Falconry refers to the hunting of wild animals by a trained bird of prey. It is an art; it requires dedication, devotion, finesse, subtlety, and skill.

On Vaisakhi day of 1634, a battle between Guru Harigobind Sahib and Mukhis Khan took place in Amritsar. Why? A Sikh hunting party set their Baj upon a royal Baj of the Mughals and brought it down. When the Sikhs did not give the royal Baj back, the altercation led to blows. Emperor Shah Jahan (1592-1666) from Lahore sent 7,000 soldiers under Mukhlis Khan to attack. The Guru’s house was plundered on the first day which was under preparation for his daughter Bibi Viro’s wedding. The second day of the battle saw fierce fighting on the grounds where Khalsa College, Amritsar is now located. The Guru delivered justice to Mukhis Khan on the second day. The first battle of Sikh history was fought and won over a Baj; it was about where do the imperial rights end and the people’s right begin.

There are many accounts that reference the Guru and the Baj. Once the Guru’s Baj killed an animal for its food during a hunting expedition. It echoes ecological balance: “Beings eat beings, that is their food.” (Guru Granth Sahib 955)⁷ 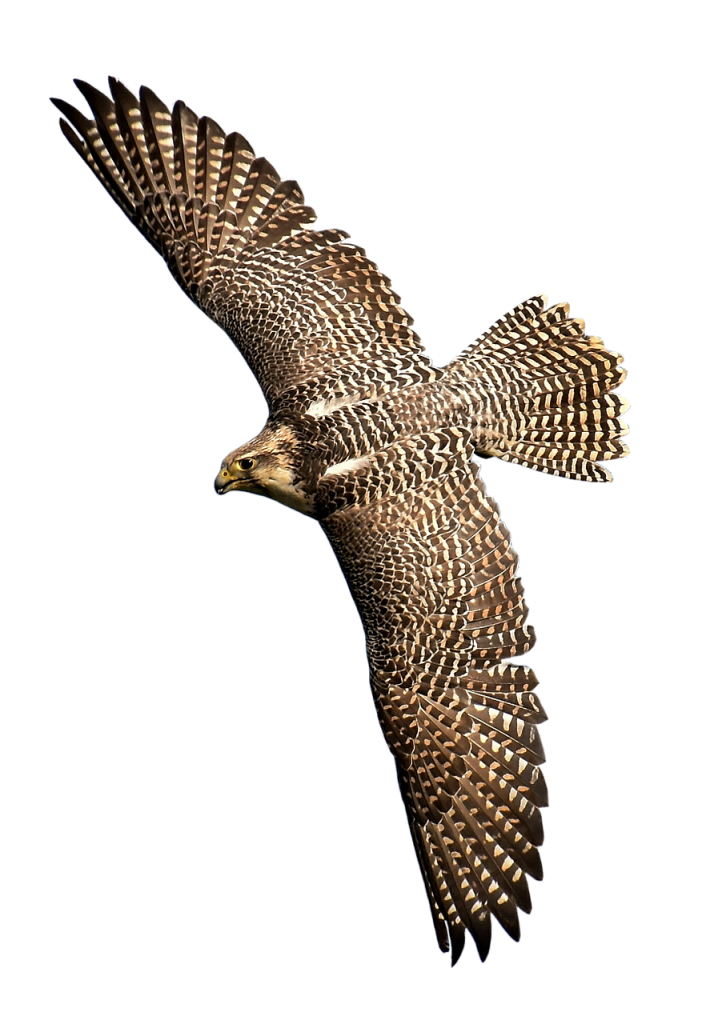 As per Sikh oral tradition, on Vaisakhi day of 1699, droplets of Amrit (immortal nectar) were partaken by sparrows who then turned into hawks, Bajs. Even if this is merely symbolic, famous poetic lines from thence onward are part of Sikh memory:

When I make sparrows fight hawks,
When I make lions out of sheep,
When I empower the oppressed,
When I give one the strength to combat 125,000 …
Then my name is to be called Gobind Singh.
There are at least four versions of this in Sikh memory.⁸

Sirdar Kapur Singh (1909-1986) in Parasaraprasna describes “the [Sikh] mind’s gaze within” when elaborating “How a Sikh is Knighted a Singh”:

Then, all the five officiants should visualize in their minds the archetypal form of Guru Gobind Singh, tall, erect, dark blue clad, wearing an aigrette of pure dazzling gems on His steel-discus-laced peaky turban, with a white hawk on his left hand and a pure steel lance in his right, “fully armed”, with a dark blue steed as his mount or vehicle.

The Khalsa is Baj-like, carries the same traits. As the Guru Khalsa Panth, the Sovereign Sikh collective, also historically kept Baj and several continue the tradition.

The hawk has certain characteristics which are unique. The Khalsa demonstrates those same Baj-like qualities in the field. The Sikh chisels those values in preparation.

Freedom: The hawk cannot be caged; it will break it or die. The Khalsa cannot be enslaved, spiritually or physically. The Sikh vision does not accept slavery and repression; it will always struggle for freedom and honor.

Courage: The hawk is full of courage, strength, and agility with its claws-weapon. The Khalsa is never afraid; the Guru’s gift of Kirpan, the sword to protect the honor, as its ally borne from the Wisdom-Sword of Guru Nanak Sahib. Kirpan is to accompany the forces for “good” to protect the weak and to destroy the tyrant.

Carefree: The hawk soars the skies in the opposite direction, spots its prey on the ground and has no permanent home; it is ever ready to fly and explore. The Khalsa takes spiritual flights, practices justice on the earth. The Khalsa’s end goal is to be in love with 1Force and be an instrument of 1Ness everywhere. The Sikh petition seeks elevated thoughtfulness and humble grounding. The Sikh adage for those who exhibit “goodness” and “badness” is opposite of what the world says. As per Guru Nanak Sahib’s dictum: displacement for those who are “good” to spread it everywhere, and prosperity for those who are “bad” to contain it by staying put locally.

Self-Reliance: The hawk hunts its own food, catches its own prey in midair. The Khalsa does not take any handouts, gives gifts of food and rights. The Sikh institution of Langar (food) and Shahadat (martyrdom) is a testament since its Guru-period era.

Noble: The hawk, both male and female, commands the sky with its presence; it is royal. The very presence of the Khalsa, crowned by the Guru, organically commands the situation or the event. The Sikh culture upholds Nam-Identity that embodies all virtues of nobility for all, regardless of gender or racial identity, and economic or social strata. Kaur and Singh are noble for they live with integrity and generosity, for Panth-ki-Jit (victorious Sikh collective) and Sarbat-da-Bhala (welfare of humanity) fearlessly.

The hawk for the Sikhs is heightened spiritual-political awareness, the ebb and flow of the Guru’s vision. The Baj for the Khalsa is the Guru’s blessing of strength and courage; it says the Khalsa is protected and must pursue freedom.

From 1699 to time immemorial, Baj remains etched in the Sikh memory. In history and folklore during political or tense times, sighting Baj is deemed a sign of the Guru’s presence. Seeing the Baj at historical gurduaras (Sikh places of learning and worship) or where the history was unfolding, the Sikhs related it to the Baj of Guru Gobind Singh Sahib witnessing their plight. That raised their morale to keep marching!

From the establishment of the Khalsa Raj in 1710 to the 1984 Ghallughara, Baj of the Guru accompanied the Sikhs. There were few incidents of Baj sightings in 1984 and since then.

In 1984, Baj was seen by the Sikhs in the Panjab and in Delhi multiple times in multiple locations; they were comforted by it for that meant the Guru is with them.

In the first week of September 1984, when a falcon (Baaz) happen[s] to sit on a tree near the main Reception of the Prime Minister’s House at about 1:30 P.M. Balbir Singh spo[t]ted the falcon called Beant Singh there and pointed out the falcon. Both of them agreed that it had brought a message of the Tenth Guru of the Sikhs and that they should do something by way of revenge of the “Operation Blue Star”. Therefore[,] both of them performed `Ardas’ then and there.

… Assuming that falcon did appear and sat on a tree in the PM’s house and that Beant Singh and Balbir Singh did offer ‘Ardas’ on the occasion, there is “nothing unusual or abnormal about the incident.” The sanctity of the falcon as associated with the Tenth Guru is not denied.⁹

In 1989, Indian state of Panjab named Baj its state bird. Today, there is no goshawk Baj in Panjab’s aviary, sanctuary, or zoo. Since the mid-1990s, the people or the conservators have not seen Baj in the Panjab.¹⁰

The hawk scans its environment from high above the ground, looking for potential threats. The hawk uses intuition and vision to make important decisions. The hawk uses laser focus and precision to get things done.

Baj may be vanishing; nonetheless, its rarity will remain a reminder for the Sikhs to continue their march towards the Guru’s ideals! 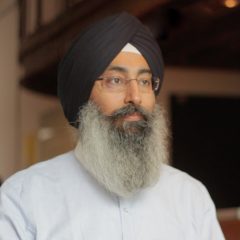 Harinder Singh is the Senior Fellow at the Sikh Research Institute. He holds a BS in Aerospace Engineering from Wichita State University, an MS in Engineering Management from the University of Kansas, and an MPhil from Punjab University in the linguistics of the Guru Granth Sahib.

He co-founded the Sikh Research Institute and the Panjab Digital Library, envisioned the Kaur and Singh Academy, and organized the Free Akal Takht campaign.

He appears on radio and television programs and speaks at universities, parliaments, museums, conferences, and civic institutions. He has authored several books and numerous articles integrating the political and the spiritual. He consults on curriculums, exhibitions, and films and is featured in many documentaries on the Sikhs, the Panjab, and South Asian matters.

His current focus is on developing critical thinking for Sikh institutions via the State of the Panth report series and developing open-source decoding of Guru Granth Sahib in contemporary Panjabi and English for a global audience.

He has served on the National Conference on Community and Justice boards, The Fellowship of Activists to Embrace Humanity, The Nanakshahi Trust, among others. He looks for culturally-specific things to experience and a light roast pour-over coffee to sip during travels, reads and binge-watches to stay in touch with what the world is up to, and listens to sabads, poetry, Hir, jazz, and political rap.

Harinder Singh resides with his family in the United States.