Troy Cuzzetto last played more than a month ago, on May 14 in the very first game of the BC Junior A Lacrosse League season, spending the next six games on the bench as his goaltending partner Brayden Wandler has been playing phenomenally with a 7.89 goals against average (fourth) and .808 save percentage (fifth).

This past week, with the Langley Thunder on a two-game losing streak and coming off a 10-day break between games, Cuzzetto got the call in back-to-back games, stopping 39 of 46 shots in the Thunder’s 16-7 win over the Burnaby Lakers in Burnaby on Wednesday and then following that with a 41-save effort on 45 shots as Langley made it two straight, defeating the visiting Port Coquitlam Saints 10-4 on Thursday night at Langley Events Centre.

With his two-game performance, Cuzzetto jumped to second in the BCJALL with an .828 save percentage.

“Wandy (Braydon Wandler) is on a run – he is playing outstanding – whenever I get a chance, I just want to help the team out,” Cuzzetto said. “Our defence was playing really well, keeping them to the outside, not letting them get many good chances. They were making it easy for me.”

Against Burnaby, the offence came out firing, scoring six goals in the first period alone on their way to the team’s second-highest single-game output of the season. 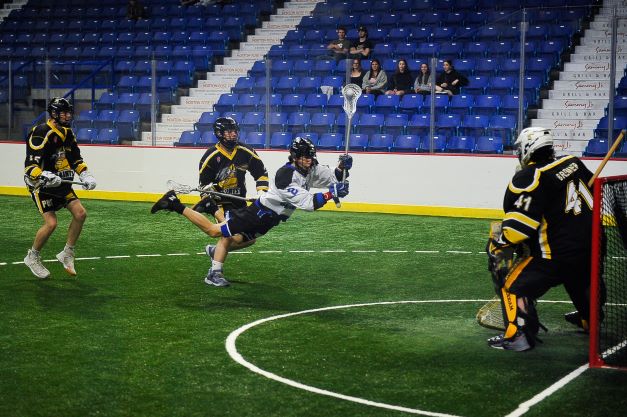 Thursday’s game saw goals harder to come by as the Thunder managed just five over the first 40 minutes before matching that with a five-goal outburst in an eight-minute span of the third period.

“Burnaby was a solid 60 minutes of hard work and sacrificing the bodies; tonight, the third period was much more like that. The first two periods were a little bit slower than normal, but we stuck with it and kept the engine going,” said Langley coach Adam Smith.

It always helps when a coach can list off the goals against on one hand as Langley surrendered just one five-on-five goal to go along with a six-on-five goal on a delayed penalty and then two transition goals.

“The defence, we were trying to clean up the positioning and the communication and Troy played a really good game back there,” Smith said.

Having 10 days off since their last game was also beneficial as the team was able to get in four or five practices, especially as the team finds itself in the midst of five games in a nine-day stretch between June 15 and June 23. 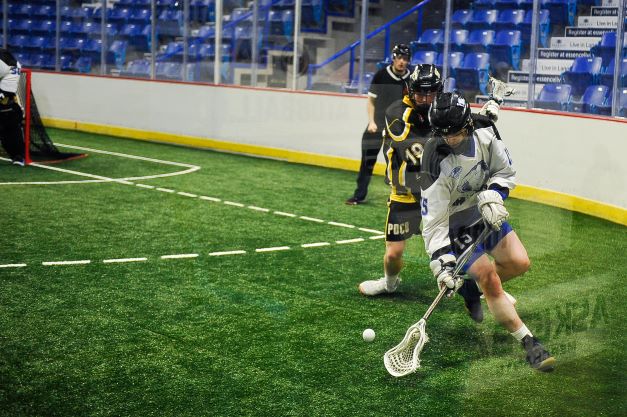 “It helps us gel on the floor, to communicate better. We were able to reset ourselves and come out strong,” Cuzzetto said of the practice time. “We were able to get our bodies back together, heal up from some injuries.”

Thursday’s game saw Stuart Phillips finish with a goal and five helpers while Drew Kask (three goals, one assist) and Kaden Doughty (one goal, three assists) both had four-point games. Kyle Brunsch (one goal, two assists), Ethan Quinn (one goal, one assist), Cody Malawsky (one goal) and Graysen Balatti (one goal) had the rest of the offence.

The Saints had four different goal scorers with Josh Mills, Ty Fisher and Tenzin Nyman each scoring a goal and an assist.

Against the Lakers in Burnaby the night before, Malawsky and Phillips each delivered four-goal games with Malawsky also adding seven assists for an 11-point game. Brunsch (three goals, one assist), Kask (two goals, two assists), Ben Gagnon (one goal, four assists), Doughty (one goal, three assists) and Matt Abbott (one goal) rounded out the scoring.

Marcus Klarich and Thomas Vela each had a hat trick for Burnaby.

Up next for Langley is a first-place showdown with the Victoria Shamrocks in Victoria on June 19 as both teams are tied for first place at 7-2 (although Victoria does a play game before the two meet). They also have a road game in New Westminster on June 21 before their next home game at Langley Events Centre on June 23 (7:30pm) against Burnaby as the team wraps up a stretch of five games in nine days.