This is the first time flag bearer duties will be shared by two Canadian athletes at the Paralympic Games.

“I am beyond thrilled to congratulate Ina and Greg on being selected as Canada’s flag bearers,” said Josh Dueck, chef de mission, Beijing 2022 Canadian Paralympic Team. “Ina and Greg are not only two of Canada’s most successful Paralympians who have reached the absolute pinnacle of their sports, they also both embody the best of Paralympic values and are incredible ambassadors for sport. Carrying the flag is a much-deserved honour for them both and a reflection of their years of dedication and achievements. I will be proud to march behind them at the Opening Ceremony and I know the entire team is supporting them.”

Forrest, who is competing at her fourth Paralympic Games, is one of the world’s most decorated wheelchair curlers. A member of the national team for over 15 years, the 59-year-old holds two Paralympic gold medals (2010, 2014) and a bronze (2018), along with three world titles.

“It is a great privilege to be asked to be flag bearer, and it will truly be an honour, a thrill and a responsibility to carry the flag and show the whole world all the great athletes behind me,” said Forrest. “It is such a special feeling to represent Canada. I remember my first time going into Vancouver 2010 and the feeling you had with the roar of all the Canadian supporters, and I know family and friends and lots of Canadians are watching and supporting us in the same way. I hope that all first-time Paralympians have that same feeling at these Games because it’s a tremendous proud-to-be-Canadian moment.”

Westlake, who was captain of Canada’s Para ice hockey team for many years, has been among the best athletes in his sport since he was a teenager. The 35-year-old, who has been part of three world championship-winning squads, is now set for his fifth Paralympic Winter Games, looking for more hardware having claimed gold in 2006, bronze in 2014, and silver in 2018.

“It is an incredible honour to carry the Canadian flag at the opening ceremony of the 2022 Paralympic Winter Games, and to share this honour with an exceptional athlete like Ina is very special,” said Westlake. “While I am very proud to represent my country and be a member of the Canadian Paralympic Team for my fifth Games, I am truly humbled and cannot thank my teammates, coaches and our staff enough, as well as all those who were involved in the selection process for this incredible opportunity.”

Forrest and Westlake will both be taking to their respective ice surfaces for their first games on March 5 in Beijing. Canada will challenge reigning Paralympic champions China in its opening round-robin match in curling at 2:35 p.m. local / 1:35 a.m. ET while preliminary Para ice hockey play will see Canada face off against its biggest rival USA at 1:05 p.m. local / 12:05 a.m. ET.

About the Canadian Paralympic Committee: Paralympic.ca 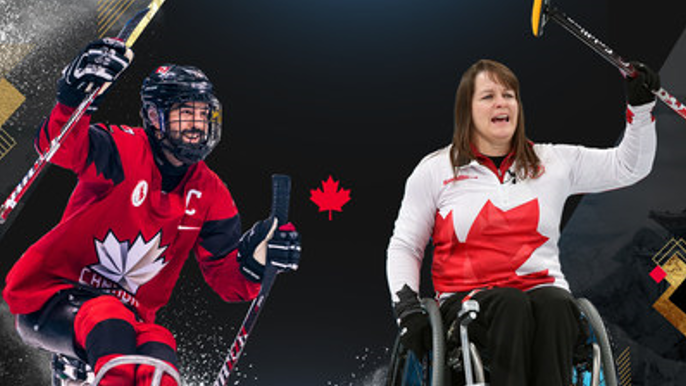