In a battle of the last two unbeaten teams, it was the Grizzlies Lacrosse Club staking claim to early season bragging rights with a 14-8 win over the Sea Spray Lacrosse Club.

In a battle of the last two unbeaten teams, it was the Grizzlies Lacrosse Club staking claim to early season bragging rights with a 14-8 win over the Sea Spray Lacrosse Club.

Both teams entered week 3 of the Arena Lacrosse League West Division with 2-0 records but the Grizzlies built an early 7-0 lead and then after the Sea Spray battled back to make it a two-goal game, the Grizzlies closed on a 6-2 run to improve to 3-0.

“There are ups and downs, peaks and valleys, so the guys just settled back down and just played our systems and kept on rolling,” said Grizzlies coach Ryan Williams whose team has allowed a league-low 26 goals and is the only one of the four to boast a positive double-digit goal differential at +15.

“And we were able to pull it off against a big, strong team.”

Sekawnee Baker (four goals, one assist) and Clark Walter (three goals, two assists) led the Grizzlies with five points apiece while Andrew Gresham chipped in with four helpers and Erik Maas had two goals and an assist. Brayden Laity, Kieran McKay, Nash Moog, Andrew Joseph and Pearson Willis rounded out the scoring with a goal apiece while goaltender Kyle Mooney – the game’s first star – made 55 saves for the Grizzlies. 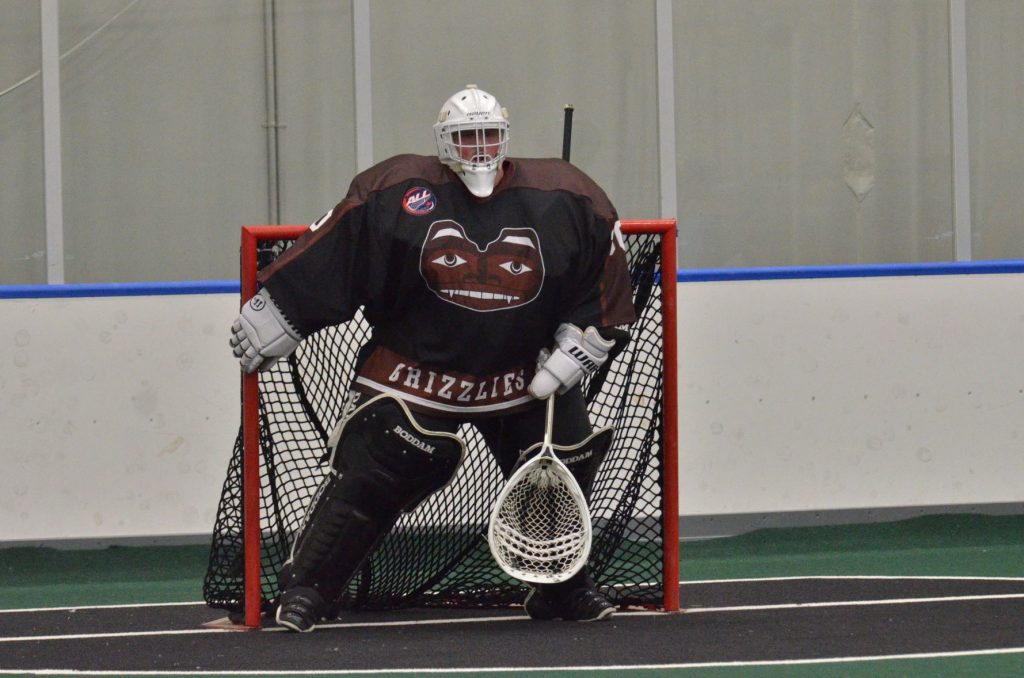 “I would give the first star to our defence. They played great and made it really easy for me. I didn’t really have to do a lot – just great angles and the ball just hit me,” he said.

The Sea Spray were led by Adam Dickson’s two goals and four points and a goal and two helpers apiece form Tyler Kirkby and Sam Clare. Erik Forsellius (one goal, one assist) and Brendan Szabo (two assists) each had two points with Robert Hofseth and Geordie Phillips scoring one goal apiece.

In goal for the Sea Spray, Matteo Tack made 11 saves on 13 shots before exiting with a first-quarter injury with Lee Jackman going the rest of the way and stopping 28 of the 40 shots he faced.

While both teams were missing key players, the Sea Spray were also playing short a few bodies.

“We picked up our game and got all the way back to 8-6 but I think the lack of legs caught up to us in the end. They (Grizzlies) are a good team. We have to go back to the drawing board and hopefully come back with a full team next time and give it a better go,” said Sea Spray coach Russ Heard.

Both teams are back in action on January 8 with the Sea Spray facing the Shooting Eagles at 1:00pm and the Grizzlies going up against the Black Fish at 4:00pm.