Zack Ostapchuk scored the overtime winner as the Vancouver Giants returned to the win column in their first game of 2022.

Zack Ostapchuk scored the overtime winner as the Vancouver Giants returned to the win column in their first game of 2022.

Ostapchuk’s goal gave the Giants a much-needed 4-3 victory on Sunday afternoon at Langley Events Centre in a Western Hockey League B.C. Division showdown with the visiting Kelowna Rockets. The win – which improved the Giants to 15-16-1-0 – was just the second in the past 10 games for the Giants. Kelowna’s record falls to 16-9-1-3 with the loss.

The Rockets had a great chance to earn the second point, but Jake Lee’s shot hit the crossbar and Vancouver was able to jump on the loose puck, skate down the ice and after Cole Shepard was denied on his initial shot, Shepard centred the puck to Ostapchuk who buried the game-winner.

Vancouver received several reinforcements for the game with the return of head coach Michael Dyck, captain Justin Sourdif and goaltender Jesper Vikman, who were all in Alberta for the World Junior Hockey Championships. Ostapchuk had also missed the team’s last game while serving a one-game suspension. 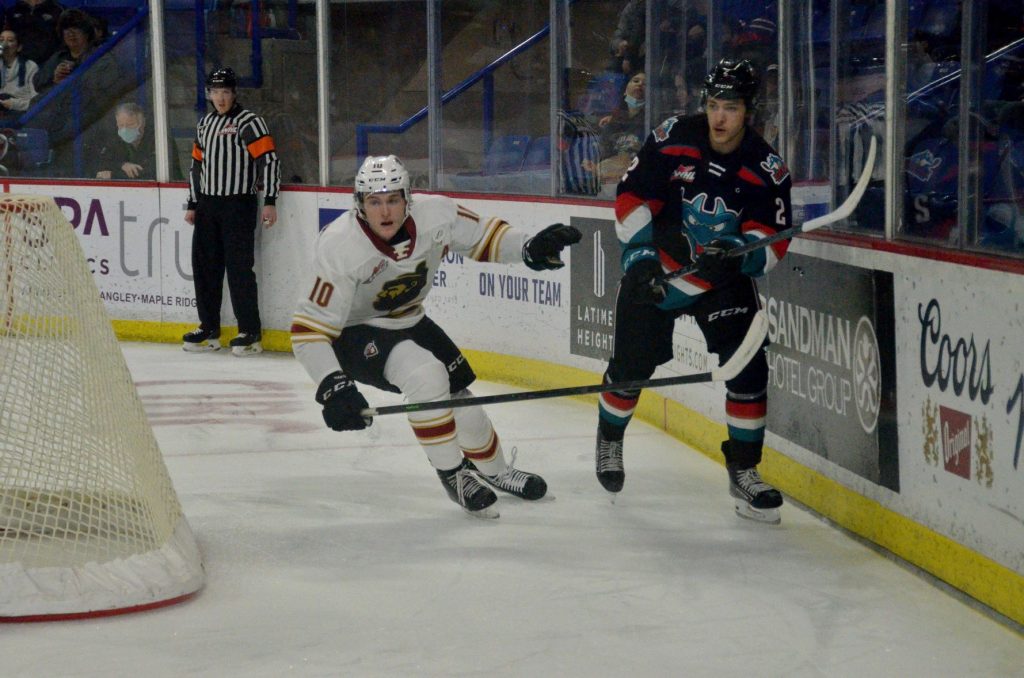 “We got some horses back and that really helps our confidence a lot,” Ostapchuk said. “(But) we had a bunch of guys step up and that is much needed when you play good teams like Kelowna.”

The Rockets’ Gabriel Szturc scored twice in the first period – opening the scoring at the 1:19 mark and then again with 1:53 to play in the frame – with Tanner Brown tallying for the Giants in between. Kaden Kohle and Ty Thorpe would score second-period markers for Vancouver for a 3-2 lead with a period to play before Colton Dach’s power-play tally tied the score at the 13:07 mark of the third.

“I liked the way we responded after going down early and after giving up the power play goal in the third. I thought we showed a lot of composure and poise and stuck with it,” said Giants coach Michael Dyck.

The coach was also pleased to have a balanced scoring attack with three of the four lines chipping in with goals.

“It was all about playing as a team. Those guys give you a sense of confidence and obviously add some depth, but if we were going to win this thing, it was by committee,” Dyck said about the team getting some of its top players back in the line-up. “It is a step in the right direction. That is what we were doing when we were having success. Everyone just has to do their job.”

Sourdif was the first star with two assists while Dach was the game’s second star and Vancouver’s Damian Palmieri was the third star.

Vikman stopped 20 shots for Vancouver and Talyn Boyko made 30 saves in the Kelowna goal as the Rockets were outshot 34-23.

The game featured just three power plays with the Rockets going 1-for-2 while Vancouver was 0-for-1.

The Giants are off until January 7 when they travel to Kelowna to face the Rockets before they play in Kamloops on January 8. The next Vancouver home game at Langley Events Centre is January 9 at 4:00pm against the Portland Winterhawks.