Sometimes the best laid plans don’t go as planned but still manage to work out for the best.

“I told myself ‘don’t shoot five-hole’ and when the ball came out, it went five-hole,” explained Carter Dickson.

Each team had failed on their opening possessions of the sudden-death period before the Sea Spray were able to get a second crack.

“My best buddy Parker Kump set an unbelievable pick and I just around (and fired),” Dickson explained of his winning goal.

The win improved the Sea Spray to 4-1 while the Black Fish are now 1-4.

The game did not begin very well for the Sea Spray as they were down 8-3 at the half.

“We weren’t running on all cylinders and hard time getting out of neutral and I give full credit to that team (Black Fish), they played very physical and had a smart game plan,” said Sea Spray coach Russ Heard.

The Black Fish would run into penalty issues in the third quarter and their opponent took advantage, scoring the period’s only three goals and then another pair to open the fourth. Going back to the second quarter, the Sea Spray rattled off seven straight to turn an 8-3 deficit into a 10-8 lead.

“We just had to work out a few kinks in that first half. We talked as a team on what we had to do to support each other and came out and executed,” Dickson said, while also crediting the team’s defence, which only had seven players.

Heard said the team’s just wanted to  chip away a goal at a time and while their offence was rusty, they were able to generate scoring with their power play and some greasy goals in transition.

“You have to use that mentality and thankfully in the third quarter our defence and goaltending shut them down,” he said.

To their credit, the Black Fish battled back, tying the score at 10 before the teams traded goals to end regulation.

The Black Fish were looking for a second straight victory after knocking off the previously unbeaten Grizzlies the week prior.

“We are trying to break our games into four games. And one quarter – if you are not consistent – it can cost you. They tied the game up there,” he said. “We used a lot of energy to tie it up, but we just couldn’t get over the mountain.”

I am not worried. It is disappointing, I thought we played well enough to win,” he said. “We need to minimize our penalties and execute a little bit better when it is crunch time.”

Offensively, the Sea Spray were led by five points (all assists) from Sam Clare, and four points apiece from Adam Dickson (three goals, one assist) and Nick Preston (one goal, three assists). Rob Hofseth, John Hofseth and Tyler Kirkby each potted a pair of goals while Gordie Phillips and Preston Lupul had a goal and an assist apiece.

Goaltender Lee Jackman was the first star after making 41 saves on 53 Black Fish shots. The game’s second star was his goaltending counterpart with Gordy Bowden stopping 46 of 59 shots.

Up next for the Sea Spray will be a first-place showdown and battle of 4-1 teams as they face the Grizzlies Lacrosse Club on January 23 at 1:00pm. The Black Fish take on the Shooting Eagles Lacrosse Club at 4:00pm. Both teams enter the game with 1-4 records. 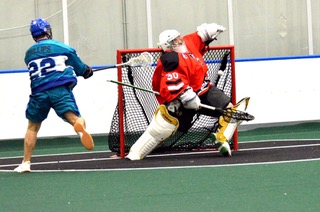 Playing his first competitive lacrosse game in three years, Steve McKinlay did not miss a beat, scoring three times and more importantly, tracking down a rebound in overtime to maintain possession and then setting up Erik Maas for the sudden-death winner.

“I was thinking about shooting but I saw Maas coming down that back side so I just got him the ball and he put it in, and the game was ours,” he explained.

The Grizzlies were down 14-8 in the opening moment of the fourth quarter before scoring six straight to force overtime – including a Sekawnee Baker penalty-shot goal with 1:31 to play after the Shooting Eagles were called for an illegal substation.

The win improves the Grizzlies to 4-1 while the Shooting Eagles sit at 1-4.

While most of the players in the Arena Lacrosse League are in their 20s, McKinlay will be 36 years old next month. He last played competitively in 2018 before requiring Achilles’ surgery and then dealing with the sport’s pause because of the pandemic.

“I want to paly this game as long as I can; I love the game and the amount of joy it brings to me,” he said about what drew him back. “Any time I can get to come on the lacrosse floor is a good day for me. It is the medicine game for me and the opportunity to play in this league just makes me happy.”

McKinlay scored twice in the opening quarter but the Grizzlies were down 5-3 after 15 minutes and 11-5 at the half. Prior to halftime, the Grizzlies replaced goaltender Brandon Humphrey, who allowed 10 goals on 36 shots, with Kyle Mooney.

“Nothing on Humphrey, he played well, guys just weren’t getting back so transition was happening on him,” explained Grizzlies coach Ryan Williams, who said the move was more about getting a message to the team. “Once we got settled them down, we talked about the highs and lows, and staying even keel and pick away at one shift at a time, and the guys chipped away at it.”

Williams added a win like this shows character in a team.

Mooney would stop 26 of 30 shots and was the game’s first star. And with the back end solidified, the Grizzlies chipped away at the deficit, cutting the score two 13-8 after three quarters before completely taking control in the fourth, scoring six straight to end regulation and then net the OT winner.

Maas led the Grizzlies with two goals and five points while McKinlay (three goals, one assist) and Baker (one goal, three assists) each had four-point games. James Baker and Mitch McDole chipped in with two goals apiece and a helper with Andrew Gresham (one goal, two assists), Nash Moog and Aaron Skye rounding out the scoring with a goal apiece. 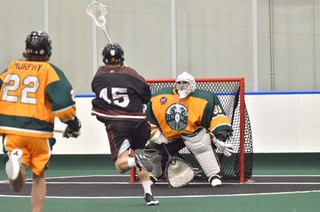 Brody Harris made 41 saves on 56 shots for the Shooting Eagles and was the second star with Baker earning third star honours.

Despite the loss, Shooting Eagles coach Adam Smith saw plenty of positives from his squad.

“In the fourth quarter, they kept being able to just sneak it past us,” he lamented, adding that the fact just needs to get some practice time together to correct the minor mistakes that are costing the team. Three of the team’s four losses have been by a single goal.

“We get a practice and can clean up the defence and bring it down a couple of goals and that’s a win.”

While McKinlay was debuting for the Grizzlies, Ryan Martel played his first game for the Shooting Eagles and led the team with five goals and eight points.

Dylan Laprade (three goals, one assist) and Coady Adamson (two goals, two assists) both had four-point games with Jake Foster finishing with a trio of helpers. Cole Paciejewski, Garrett Winter, Mark Yingling and Declan Fitzpatrick all finished with a goal and an assist.