It was a whirlwind week for Justin Geddie.

Less than one week later, the 20-year-old goaltender from Victoria was playing in front of 6,999 fans at Saskatoon’s SaskTel Centre on Friday night (January 14), making 42 saves to help the San Diego Seals defeat the Saskatchewan Rush 12-11 in National Lacrosse League action.

For his efforts, Geddie earned the game’s second star award.

Geddie signed with the Seals on January 12 and was promoted to the team’s active roster after both goaltenders were placed on the COVID Protocol List. Through four games in the ALL West Division with the Black Fish, Geddie had posted a 1-1 record with a 12.58 goals against average and a .784 save percentage.

The six-foot-five goaltender – and 2019 BC Junior A Lacrosse League Rookie of the Year with the Nanaimo Timbermen – was originally taken by the Calgary Roughnecks 32nd overall.

Playing in the NLL has been a dream since Geddie first donned the goalie pads at age 9 (he played out the first five years).

“It just felt amazing to get that opportunity (to play in the NLL), especially in an environment like Saskatchewan,” he said by phone on Saturday, now back home in Victoria. “It was just such an honour.” 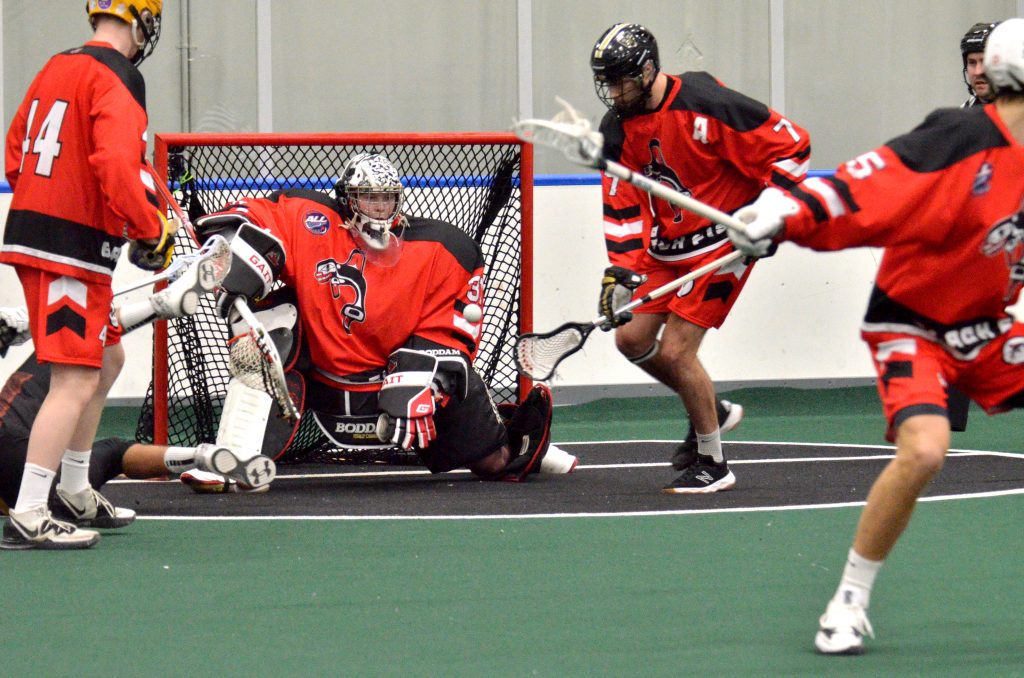 After signing on the Wednesday, Geddie flew to San Diego on Thursday and practised with his new teammates before they left for Saskatoon the following day. Friday’s game began with Saskatchewan’s Robert Church scoring on the first shot of the game, less than a minute into the contest. But Geddie settled down and stopped 20 of the next 21 shots as the Seals took a 4-2 lead into halftime.

“I got back in my groove and started feeling comfortable,” Geddie said about his mindset after allowing the first shot he faced to elude him.

The Rush came out in the third quarter and managed to put up five goals on 18 shots but the Seals still led 9-8 with a quarter to play before San Diego scored twice in the final five minutes to break a 10-10 tie in the 12-11 win.

Geddie said prior to the game, the Seals’ Dane Dobbie had a simple message for the rookie: “Just worry about stopping the ball; the offence will put up  more goals than Saskatchewan.”

Following the victory, when Geddie entered the locker room, his new teammates doused him in celebration.

“I was expecting something like that but it was a ton of fun,” Geddie said. “It is a great group of guys in San Diego.”

Geddie was just glad to make the most of his opportunity to play at the sport’s highest level.

“It was surprising to sign, but I was ready for it and excited for the chance and wanted to make do with the opportunity I got with them,” he said.

The Seals improved to 4-1 with the victory, good for top spot in the NLL’s West Division and the team is now off until January 29

Geddie becomes the fifth player from the Arena Lacrosse League West Division to earn a spot on an NLL active roster for a game this season and the first to play in a game.

“It is fantastic to see someone like Justin turn his strong start in the Arena Lacrosse League into an opportunity at the sport’s highest level,” said Ken Buchan, the commissioner of the ALL West Division. “Our league is all about helping our players showcase their skills and talents to help them advance their lacrosse careers and we are thrilled Justin made the most of his chance last night.”