The Vancouver Giants failed to take advantage of an opponent with a depleted roster as the visiting Victoria Royals – who were only able to dress 14 skaters compared to the Giants 18 – made it four straight wins over their B.C. Division rivals. 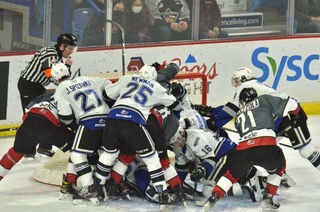 The Giants had a great opening 10 minutes on Monday night at Langley Events Centre as the teams returned from the Western Hockey League holiday break with Kaden Kohle redirecting an Alex Cotton pass at 3:23 for the game’s opening goal. At one point, the Giants had registered a dozen of the first 13 shots on goal.

“I liked the jump we had; I liked the amount of pucks we were putting to the net. Obviously the second and third chances were there. I thought their goaltender did a really good job of giving them a chance to get their feet under them,” said Giants associate coach Keith McCambridge. 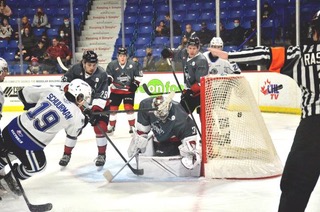 Brayden Schuurman tied the score with just over six minutes to go in the opening frame and then gave the Victoria visitors the lead for good, scoring on his own rebound on a power play in the final minute of the period.

“There are times with our game where one goal goes in and we become a little fragile, we get on our heels and the momentum shifts. Those shifts in momentum are going to happen during a game; it is just a matter of managing it better, not letting it hang around for two, three shifts, and I thought that happened,” McCambridge said. “When Victoria scored, they were able to put together consecutive shifts to get us on our heels and nullified our good start. I liked our start but that block in the middle where we lost momentum, that can’t happen.”

It was still just a one-goal game midway through the contest but at 11:16, Bailey Peach extended the lead to 3-1. The power-play goal came one second after the first of two Vancouver penalties had expired.

The Giants would receive a golden opportunity to get back in the contest after a five-minute charging major to Victoria’s Nate Misskey, which became a three-minute Vancouver power play after Cotton picked up an unsportsmanlike minor penalty in the ensuing melee.

But Vancouver would fail to capitalize. 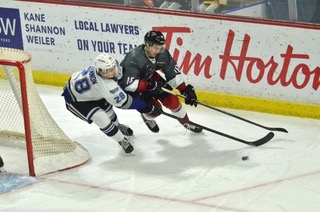 “You have to find a way to generate a goal off that,” McCambridge said of the team’s extended power play when they were down 3-1. “If you are on the wrong side of special teams, it is not a recipe to have success.”

The final shots on goal were 40-30 in favour of Vancouver with Royals goaltender Campbell Arnold making 39 saves to earn third star honours. Schuurman was the first star while Vancouver’s Zack Ostapchuk was named second star.

The two teams will now head to the provincial capital where they will resume their three-game set on December 29 and 30. The Giants next home game is Sunday, January 2 (4:00pm) when they host the Kelowna Rockets at Langley Events Centre.