The Giants were back on the LEC ice for the first time since February 28, 2020, hosting the Prince George Cougars on Friday night in Western Hockey League action.

The Giants were back on the LEC ice for the first time since February 28, 2020, hosting the Prince George Cougars on Friday night in Western Hockey League action. And the fans would go home happy thanks to a 6-4 victory Giants win, improving their record to 2-0-0-0 while the Cougars fell to 0-2-0-0.

The game was tied at three mid-way through the second period before Vancouver’s three youngest players combined to give the Giants the lead for good. Defenceman Mazden Leslie rushed up the ice and while Prince George goaltender Taylor Gauthier made the initial save, Ethan Semeniuk showed some great hand-eye coordination to bat the puck home. Ty Halaburda had the second assist on the goal.

The goal gave Vancouver a 4-3 lead after 40 minutes before Adam Hall (who also opened the scoring) and Justin Lies added third-period goals. Johnny Hooker did get the Cougars within two goals but his tally came with 40 seconds to play.

He also called the trio of Halaburda, Semeniuk and Julian Cullthe team’s most effective line, especially in the second period when the Cougars seemed to have seized control.

“(They) were consistently our most effective line in the second period. Kept it simple and played fast and put a lot of pressure on Prince George. It was certainly a big role for us because we were on our heels after they tied the game,” Dyck explained. 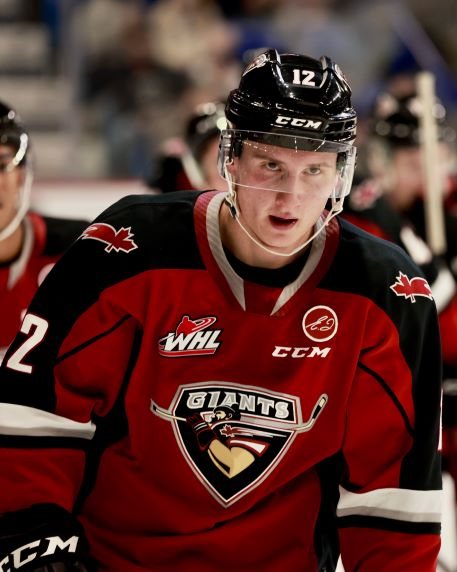 The Giants carried the run of play early in the game, outshooting the Cougars 6-1 with Gauthier making three outstanding saves to keep the game scoreless.

Vancouver would run into penalty troubles with back-to-back minors and while the Cougars did not cash in, they did have seven of the next eight shots on goal and shortly after the Giants returned to full strength, Prince George stole the puck behind the net and Fischer O’Brien potted home the game’s first goal.

The rest of the period was all Vancouver however, as the Giants peppered the Prince George goal with the next seven shots and scored three times in a 5:06 span, with Justin Sourdif setting up Adam Hall to tie the game and then Sourdif pouncing on a loose puck during a power-play scramble. Ty Thorpe made it 3-1 as he won an offensive zone face-off and then deftly re-directed Leslie’s point shot.

“I really liked the response from our team after getting down 1-0. To finish of the first period the way we did was a good response. The second period, we were on our heels a little bit and I didn’t think we had the same forecheck that we had in the first but we got that back in the third,” Dyck said.

“When we kept it simple, we were fine. When we tried to complicate things is where we got hemmed into our own zone.”

The Cougars made a game of it, striking for a pair of goals in the opening 7:25 of the middle stanza with Kyren Gronick scoring off the rush before Hudson Thornton pounced on a loose puck with his shot re-directing off a Giants stick and past goaltender Jesper Vikman. Prince George had the run of the play for the bulk of the frame before the Giants top three picks from the 2020 Bantam Draft (Leslie, Halaburda and Semeniuk) combined to give Vancouver the lead for good.

Final shots on goal were 36-35 in favour of Prince George and the special teams battle went in favour of the Giants, who blanked Prince George on all five opportunities (and are a perfect 10-for-10 for the season) and Vancouver’s power play was 1-for-3.

Vancouver is now off until October 16 when they welcome the Kamloops Blazers to Langley Events Centre. Puck drop is scheduled for 7:00 pm.