At only 19-years-old, Barrett has experienced remarkable athletic achievement, including winning the FIBA Junior World Cup (2017), being awarded the FIBA U19 World Cup MVP (2017), and being the first player since LeBron James to take home all major USA high school Player of the Year awards.

Like many Team RBC athletes before him, Barrett will build on RBC’s long-standing commitment to youth, and giving back to communities. As a brand ambassador, Barrett will help raise awareness about the importance of sport and financial literacy for young people, inspire youth to unlock their potential, and mentor the next generation through programs like RBC Future Launch and RBC Training Ground. 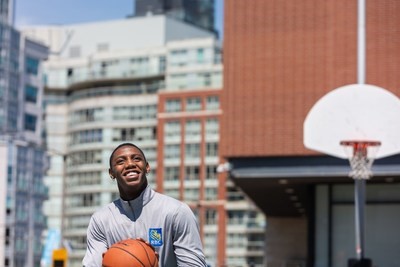 Motivated by his father (Canadian basketball icon and former RBC Olympian) Rowan Barrett and his godfather (Hall of Famer and 2-time NBA MVP) Steve Nash, Barrett understands the impact that strong mentorship has played in his own life and aspires to give back in the same way.

RBC’s connection to the Barrett family spans generations, both on and off the court. In addition to his partnership with RBC as an RBC Olympian and his longstanding client relationship, Rowan Barrett worked as an RBC Branch Manager for three years. Kesha Barrett, RJ’s mother, also spent time as an RBC customer service representative, and has even been recognized for her performance with multiple awards of distinction.

“RBC is proud to welcome RJ Barrett to Team RBC as our newest ambassador. RJ is at an exciting stage of his career with the upcoming 2019 NBA Draft and the Tokyo 2020 Summer Olympic Games qualification, and we are thrilled to help fuel his athletic aspirations, and to join forces on youth-focused community and marketing initiatives.”
– Matt McGlynn, Vice-President, Brand Marketing, RBC

“I’m excited to continue my family’s long-standing relationship with a world-class brand like RBC. Through basketball and community, we have been connected for as long as I can remember. I’m honoured to partner with a group that shares my passion for supporting the youth and young athletes in Canada, and look forward to connecting with these communities through programs like RBC Future Launch and RBC Training Ground.”
– RJ Barrett, Team RBC

“Today is a proud day for myself and my family, as we see RJ join Team RBC’s impressive roster of athletes. We continue to be thankful for RBC’s years of support, which began during my Olympic career, continued during my experience in sales leadership at RBC and with my wife’s role at RBC in customer service, and is now expanding with RJ’s budding career. We look forward to years of continued partnership ahead.”
– Rowan Barrett, General Manager, Senior Men’s National Team, Canada Basketball

About RBC
Royal Bank of Canada is a global financial institution with a purpose-driven, principles-led approach to delivering leading performance. Our success comes from the 84,000+ employees who bring our vision, values and strategy to life so we can help our clients thrive and communities prosper. As Canada’s biggest bank, and one of the largest in the world based on market capitalization, we have a diversified business model with a focus on innovation and providing exceptional experiences to more than 16 million clients in Canada, the U.S. and 34 other countries. Learn more at rbc.com.‎

We are proud to support a broad range of community initiatives through donations, community investments and employee volunteer activities. See how at rbc.com/community-sustainability.