Rupmeet also known as Rup and Hurriya both come from South Asia. He was from India and she, from Pakistan.

At the age of 18, Hurriya left Pakistan for the US to complete her undergraduate degree. After completing her Bachelors in Economics, she landed a job in the banking industry. In 2008, Hurriya decided to pursue an MBA, which brought her to Vancouver in 2009.

Meanwhile, Rup also left home at the age of 18. After completing his Electrical Engineering degree, he was hired by Infosys, one of India’s most respected global consulting firms. This job took him to Singapore and then Belgium, working for large multinational clients such as UBS, BelgaCom, PwC, and Adidas. In 2009, Rup arrived at UBC Sauder School of Business
to pursue his MBA.

And destiny crossed Rup’s and Hurriya’s paths. They met at UBC in 2009.

“We, too, are ordinary people like anyone else—but we want to accomplish extraordinary things. Satisfaction is always related to achieving a goal. It could be supporting someone new to Canada to successfully get a job, or it could be closing a big deal.”

As an early career professional working for Barclays Bank during the 2008 financial crisis, it was turbulent times in the banking world and things were changing daily. Hurriya would come to work in the morning, pound pavement all day, write credit applications in the evening and get on the phone with their credit group in London in the night. It was long, relentless hours, but it taught her resilience, courage, and boldness. She now leads RBC’s Healthcare practice in BC as VP of Commercial Banking.

In her spare time, Hurriya blogs about leadership and motivation on Medium.com/@burneyhurriya.

On the other hand, Rup, who grew up in a lower-middle-class family of five living in a one-bedroom house, was also dreaming of studying abroad. His mother used to be a dressmaker who also made homemade soap to sell in the neighborhood to supplement her husband’s limited income. Rup and his siblings could barely afford new clothes and shoes. This is where his will to win flourished and his persistence to be successful. Today, he is running his own wealth management practice as an Investment Advisor through RBC Wealth Management (RBC Dominion Securities).

Their love story began as a love-at-first-sight encounter. Coming from South Asian backgrounds, values, and ambitions, their connection was instant. Kamadeva and Rati must have been working behind the scene for sure. They began dating after a month after their chance meeting at UBC. Throughout the MBA, they supported each other. They took most of the same classes and worked together on group projects. What’s more, they had six part-time jobs to pay for food, lodging, and expenses. Date nights were at McDonald’s— once a month—on Thursdays when they got paid.

After they completed their MBA, Hurriya got a job at RBC Commercial Banking in Vancouver. Rup, never to be left behind, started his own  consulting practice; and UBC became his first client. This led to various other opportunities. Finally, they got married in 2014 at Stanley Park.

We asked the couple how they managed to accomplish such a fantastic feat! They must be extraordinary people to do what they did.
“We, too, are ordinary people like anyone else—but we want to accomplish extraordinary things,” said Hurriya.
“For us,” Rup added, “satisfaction is always related to achieving a goal. It could be supporting someone new to Canada to successfully get a job, or it could be closing a big deal.”
It’s interesting to know that both of them consider their fathers as their role model. 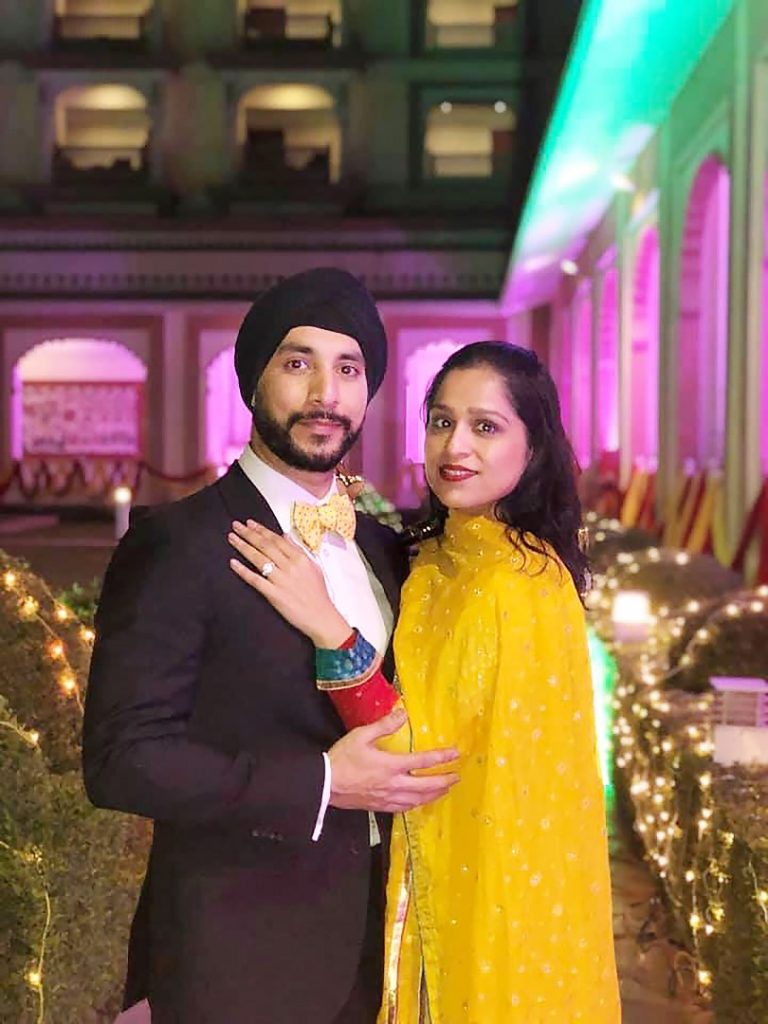 “My father made sure that despite limited financial resources, he got my brother and me the best education possible,” Rup said with reverence. “After the partition of India and Pakistan, my grandparents lost everything.
As a pre-teen, my father’s first job was as a servant in a rich man’s house in Delhi.
My father saved for his own education, which allowed him to get a job as a bank teller. In honor of my parents and their sacrifices, I established an educational scholarship at my undergrad university.”
“Similar to my father-in-law,” Hurriya began, “my father made it his life’s mission to get his children the best education possible. When he was 19, my grandfather passed away, leaving behind a wife and nine children. My father got a job as a typist at a bank and eventually worked his way into a Country Head position. My father fought against chauvinistic mindsets in Pakistan to send his only daughter—me—by myself, to study in the USA.”
Suddenly, we thought of something intriguing. What’s your spirit animal?
“A lion—fearless and does not follow a herd,” was Rup’s determined reply.
“A tiger—independent, quick, resourceful, and love the outdoors!” was Hurriya’s unflinching answer.
But we’re not finished yet being provocative. We dare the couple to describe themselves in three to five words. 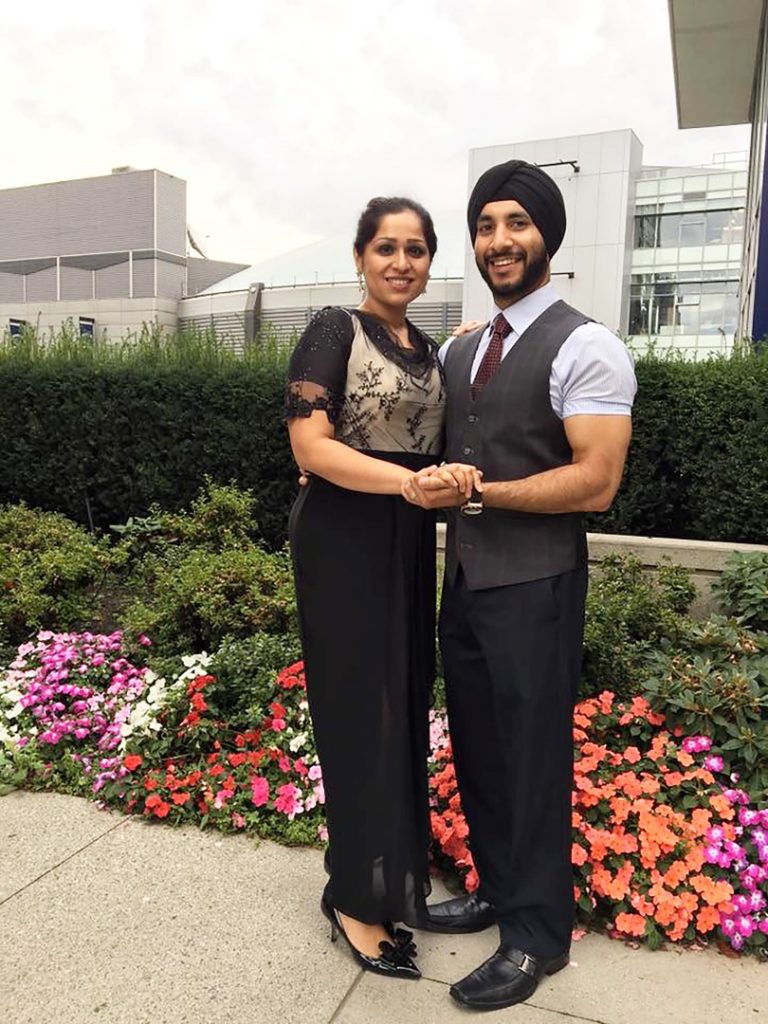 “Trust this guy,” was Rup’s quick and unabashed quip, then with a smile, adding, “That’s how my network would describe me.”
“Authentic, Creative, and Achievement-Oriented,” Hurriya emphatically spoke.
The next question we thought would be something that the couple hasn’t prepared to answer—their goals or vision for the future? Rup gave Hurriya the honor to respond first, “We had a lot of help along the way when we first came to Canada. Both of us are big believers in education as it has had a tremendous impact on both our lives. Our dream is to continue to contribute to young people from disadvantaged backgrounds that have immense potential. Both of us currently spend time mentoring people. Rup spends two Sundays every month, mentoring 3-4 people from diverse backgrounds.”
“And such preoccupation we shall continue to do,” added Rup.
We raised another sensitive query.

Describe the biggest obstacles in life you have both encountered, and how did you manage to overcome them?
“We look at every obstacle as an opportunity,” Rup spoke without hesitation. “We came to Canada on student visas with no connections. We had to work very hard to build a network and to prove ourselves. Our target was to reach out to 50 professionals in the market every day. Today, we are proud of the network and community we have built in Vancouver.”

“We work about 90-100 hours a week,” Rup said with conviction, “but we always make time for date nights twice a month, and also several mini vacations a year. This summer, we are headed to Cabo for 5 days to celebrate our 10th Anniversary!”
Happy 10th Anniversary to you, Rup and Hurriya!