Dr Arun Kumar Garg was awarded the  highest award of UBC Dept. of Pathology, Dr Dave Hardwick Life Time Achievement on May 18th  2018 by Prof Michael Allard.  The award is named after Dr Hardwick a giant in BC Medicine who  was Head and Professor of the Department of Pathology for  many years at UBC.  A honor  by one’s peers, is the  best recognition, says Arun Garg and I am very humbled and thrilled to receive this award. I have had the privilege of being mentored  by 3 great giants of leaders like Drs  Cam Coady, Don Rix and Dave Hardwick in the  field of Laboratory Medicine and Pathology in the province of British Columbia. 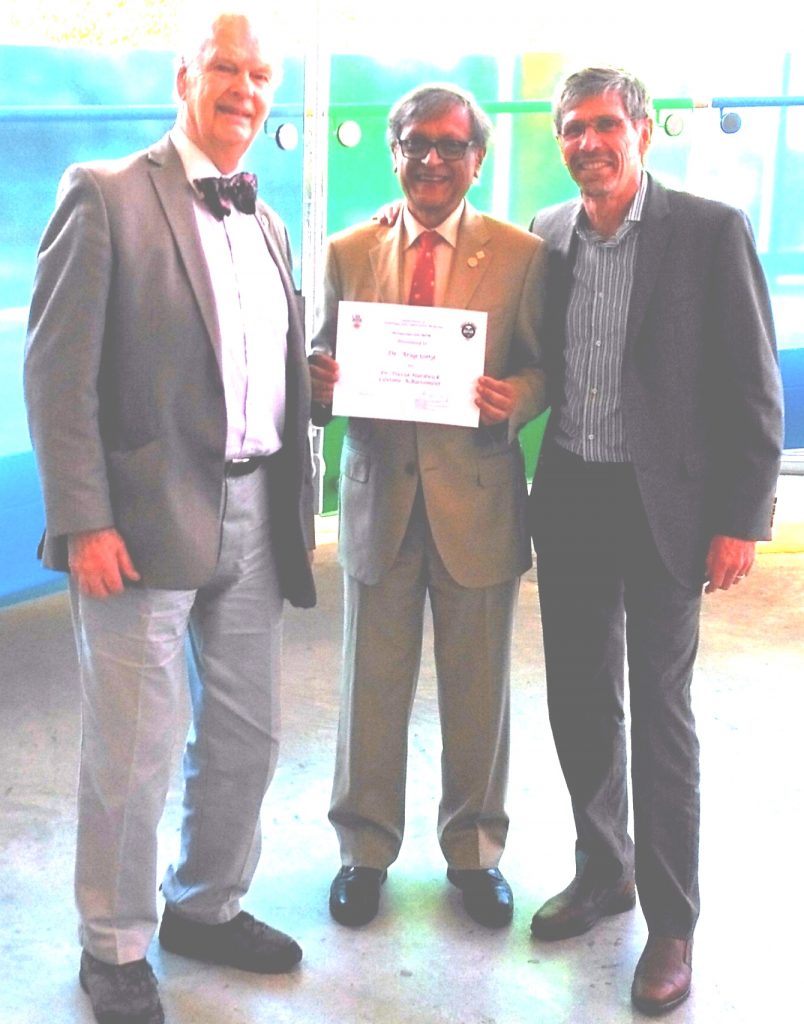 Arun shared that It is a great honor that I have been recipient of  awards named in BC medicine after 3  leaders  as each one of them played a significant role in my career.  I am especially proud as this also  is a recognition of  the communities  I am part of.  Communities, are responsible for support, nurture of an individual and my thanks to all who have provided that support. Young people of the future  may see hope and opportunity in this recognition and strive for  excellence and support to build a healthy civil society and strong community.

He is Consultant Medical Biochemist at Fraser Health, Clinical Professor at the University of British Columbia, A Clinical Service Adjunct Professor at Simon Fraser University.

He is founding Program Medical Director of South Asian Health Inst at Fraser Health, Arun conceptualize and founded Canada India Network Society in 2010. To build economic, trade, educational and cultural links between Canada and India through Healthy Civil Society.  He is also Director of the Global office in the Department of Pathology in faculty of Medicine,The University of British Columbia. www.thecins.org

He is founding member of Canadian Physicians with interest in South Asia (PISA) of BC; and Canadian Association of Physicians of Indian origin (CAPIH), and an executive member of Global Association of Physicians of Indian origin (GAPIO).he has served in many leadership positions including President of Doctors of British Columbia. He has been recipient of many awards and honors, including Hon Doctorate of Technology from British Columbia Inst of Technology and Dr Don Rix Gold medal for Leadership  of Doctors of British Columbia, Dr Cam Coady  service award and Dr Dave Hardwick Life time achievement award . He  was also recipient of inaugural  Drishti Award for leadership in Health in 2015.