The Society of Punjabi Engineers and Technologists of British Columbia (SPEATBC) is a non-profit organization that brings together over 600 engineers and technologists from different disciplines from both Canada and the Indian subcontinent. SPEATBC represents all engineering fields such as Electrical, Computer, Civil, Mechanical, Chemical, Environmental, Metallurgical and all Applied Science technologists and technicians. It was created as a result of the experiences of some professional immigrants who came to Canada in the early 1990s, only to find they lacked the professional contacts to find work in their fields. SPEATBC was formed to support such newcomers, as well as professionals from the region, in developing both professional and social contacts and resources. SPEATBC participates in and hosts several events throughout the year. Information booths are setup at both the Surrey, Vancouver and Abbotsford Nagar Kirtan events, an annual picnic hosted during the summer at Bear Creek Park, a career skills seminar and networking event in the fall and an annual fundraising dinner and banquet in January. SPEATBC hands out several scholarships at its annual dinner to promising students pursuing or planning to enter the engineering or technology fields. The Society relies on funds collected from a host of generous sponsors to enable it to provide its services to its members free of cost.
Jessie Hundal is the outgoing SPEATBC President, who led the organization during its 20th year of operations. She has the distinction of being the first female President of SPEATBC. “I feel very proud to be the first female president, especially during SPEATBC’s 20th anniversary year,” she says.
SPEATBC 2015 highlights with Jessie as President:
•    Introduction of new scholarship award worth $700 for Women in
Engineering and Technology awarded to Sumreen Rattan, currently
enrolled in the Mechatronics Systems Engineering program at SFU
•    Proposal of a new entrepreneurship award worth $10,000 by
Parminder Sandhu
•    Formed SPEATBC President’s Council of all past presidents
•    Career skills seminar and networking event attended by 70+
members, presenting Eben Watts, Ministry of Jobs, Skills and
Tourism to introduce ‘Engineers in India’ pilot program
•    Grouse Grind hike to mark the 20th anniversary on 16th May, 2015,
attended by 50+ individuals of all age groups
Jessie has been working at the University of British Columbia for over 12 years, currently Manager, UBC IT. Jessie was born and raised in India, where her parents both worked in engineering. Her mother, Dr. Harkirat Kaur Grewal, and her father, Dr. Paramjit Singh Grewal, came to Canada in the early 1980’s on student visas to complete their Masters and PhDs at McMaster University in Electrical & Computer Engineering and Mechanical Engin 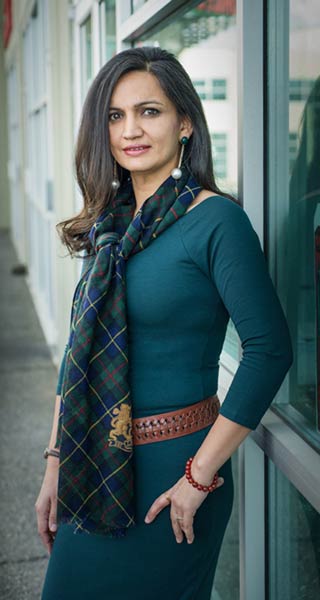 eering respectively. Her mother has been her inspirational role model, being one of the first women in Electrical Engineering at Guru Nanak Dev Engineering College, GNDEC Ludhiana, completing her PhD, serving as a Professor of Electrical, Electronics and Computer Engineering and retiring as the Principal (she is currently President for GENCO Alumni Association).
Jessie’s husband, Harvinder Hundal, is also an Engineer with a Masters in Electrical Engineering and MBA from UBC. In fact, he has been actively involved in the SPEATBC executive team and has also served previously as a SPEATBC President. Jessie obtained her Bachelors degree in computer science from Panjab University, Chandigarh before immigrating to Canada in the late 1990s. “I remember coming to Canada, and finding work in my field was difficult. But I stuck to my endeavor, and ended up doing some additional schooling in order to build on my skills as well as make connections and develop relationships with others in the field.” She decided to further her education by taking courses in computer science at the British Columbia Institute of Technology. More recently, she completed Certificates in Software Engineering and in Project Management at the University of British Columbia. Jessie is proud to be the first female President of SPEATBC, and hopes other females will eventually follow in her footsteps. One of her favorite mottos to live by, which she learned from her father, is “Life’s a dream, being fulfilled.” She notes that while the engineering and computer science fields have traditionally consisted of more males than females, there has been a marked shift in the past few years and more females have started to enter this field. She credits UBC for making a commitment to increase the number of females in programs that have historically seen more men then women, as well the efforts of organizations such as SPEATBC in mentoring high school students and hosting informational sessions to encourage them in exploring engineering and technology as desirable career alternatives. Her aspirational Goal for 2020 is to pursue UBC’s Master of Engineering Leadership (MEL) in Dependable Software Systems, an intensive and exhilarating one year of cross-disciplinary learning and personal leadership development program.
To learn more about SPEATBC, please visit www.speatbc.org