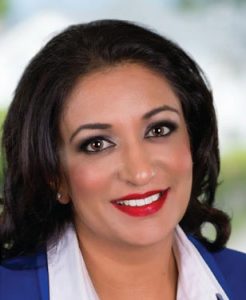 I recently sat down with Barinder Rasode at the “Community Hub,” located at 15385 Highway 10 Surrey, for an interview to talk about, among other topics, her passion for public service. It didn’t take long to witness firsthand such passion in action. Her phone rang often, yet she gave me as the interviewer her undivided attention – stopping the interview only once in order to greet a family that had come to the office.

While the Hub is a relatively new initiative, Barinder has always been active in connecting with community members, ever since she was first elected to Surrey City Council. Whether talking about crime or economic development, she has never been shy about talking about hot button issues affecting the city. “People may not always agree with me, but I believe I’ve been consistent and transparent, and that is something people respect,” Barinder explains.

Barinder’s willingness to speak out has come with some costs. After talking out about crime and public safety concerns within Surrey – comments that could potentially portray the city in a bad light, many of her peers in council began to treat her differently. However, she didn’t let their reaction deter her; in fact, it just strengthened her resolve. “I acknowledge the great work our Mayor, Dianne Watts, has done in Surrey, though I feel there are always opportunities for continued progress.” Barinder notes that most residents she spoke to feel public safety is indeed a significant issue in Surrey, one that requires greater attention from the city, and that residents she spoke to were pleased with her willingness to talk to them about it. She emphasizes the need for increased crime prevention initiatives, stronger by-law enforcement, particularly around unregulated so-called addictions recovery houses (ones that are in reality flop houses offering little support to vulnerable people trying to quit alcohol or drugs), support for non-profit agencies that can address the root causes of crime, and she believes Surrey needs a community court that is more responsive to local needs. “We’re a premier community and we deserve premier service,” she argues.

Barinder also feels more community policing is needed, one that can support the current services provided by the RCMP. She suggests such a force could be trained locally, and could be made up of local citizens. In this way, “you have people who are local, people who take great ownership of their neighbourhoods and their community.” She argues that it would not cost much to recruit and train such a community police force, noting it would amount to just one percent of the City’s 788 million dollar budget. In this regard, Barinder suggests, “We don’t have a money issue, we have a spending issue.”
The mayoral hopeful is not just talking about the issues – she has concrete plans to address such issues. She pledges, if elected, to convene a committee on electoral reform to look at issues such as ward systems and to have a community safety plan developed within 90 days of taking office.

Regardless of who they vote for, Barinder hopes residents will get out and vote in the municipal elections. “South Asians fought for the right to vote, and there are still people around the world fighting for that right. Too often politicians have not given people hope. I believe people will get involved if they feel they have the opportunity to make changes.” Barinder Rasode believes she is listening to residents of Surrey, and looks forward to the opportunity to giving them the kind of change they are hoping for.