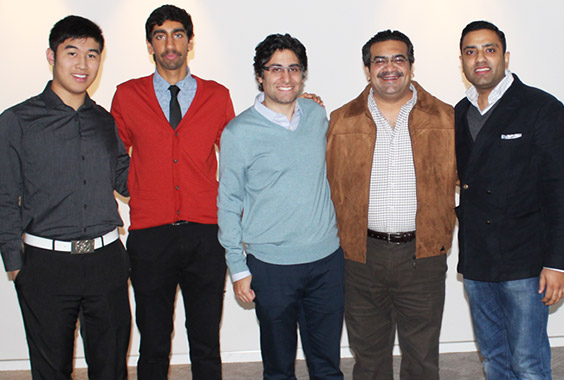 “It’s been a great way for me to give back, in a meaningful way” – Omar Visram, TYE Vancouver Program Organizer

While many of us view our weekends as opportunities to sleep in, there are a group of enthusiastic mentors who volunteer their time Saturday mornings and gather in downtown Vancouver to educate and train young would-be entrepreneurs and leaders. This program is organized and run by members of TiE Vancouver. TiE Vancouver is a not-for-profit B.C. organization with a mission to foster and support entrepreneurship. One of the current program coordinators, Armaan Malhotra, is also a graduate of this particular program. Like many of the other graduates, he returned in order to give back to a program that taught him skills that he finds he can apply in his own studies in pharmacology. “Entrepreneurial thinking extends beyond business,” he explains. “Thanks to this program, I now feel comfortable in any kind of situation that I may encounter. That is ultimately what the entrepreneurial spirit is all about.”

“These are all universal skills that youth will benefit from, no matter what they decide to go into,” adds Omar Visram, a Chartered Accountant and a program organizer. Hans Choi, who like Armaan is another alumni who returns to TYE Vancouver to give back to a program that gave him so much, notes that taking the course in grade 12 prepared him for his first-year university business courses. “It really helped me in the first year of university, having the knowledge and skills I developed through this program.”

TiE began over twenty years old in the United States, when a few entrepreneurs, all of whom shared a common ancestral root to the Indian subcontinent, decided to form a network of other high achieving professional who worked in the Silicon Valley. While its networking purposes remain to this day, TiE members also decided to volunteer their time to charitable efforts, such as mentoring others to become entrepreneurs or to teach them the values of being an entrepreneur, which can translate to other fields beyond the business world. And while TiE, which stands for “The Indus Entrepreneurs”, started as a network of Indian entrepreneurs, many of its projects and initiatives are intended for people of all ethnic backgrounds. In fact, many of the TiE chapters prefer the acronym “Talent, Ideas and Enterprise” as a more fitting description of their organizations. Whatever the definition, TiE’s successes cannot be overlooked: today, TiE has 13000 members belonging to 61 chapters in 17 countries, over 2500 experienced entrepreneurs and business executives as Charter Members, and boasts support from a wide range of organizations, including small business owners and members of Fortune 500 companies.

The Vancouver chapter of TiE began in 1999, and it past president, Vik Khanna, joined the organization in 2009. While Vik enjoyed being a member of TiE and appreciated its networking initiatives and making connections, he also wanted to see the local chapter do more in terms of preparing the future generations of entrepreneurs and leaders. As a youth, Vik had won a Vancouver School-district wide contest on becoming a youth ambassador, an achievement which took him to Atlanta, GA and Washington, DC including a visit to the White House. “It was a profound life experience,” he recalls, one that made him realize the value of real-world education and mentorship resulting in a life experience. When Vik became President of the TiE Vancouver chapter in 2011, he discovered a program being delivered by other TiE chapters, and instantly decided to bring that program to Vancouver. As a result,  and with extreme heavy lifting from founding co-chairs, Amit Sandhu and Rattan Bagga,TYE (“TiE Young Entrepreneurs”) were introduced to Vancouverites in the fall of 2011.

TiE Young Entrepreneurs (TYE) runs every Saturday, from 9:00 am to 1:00 pm. Program participants are grades ten to twelve high school students residing in Metro Vancouver. It is divided into 3 components: the Business Accelerator, Idea Incubator and the Venture Challenge. During the Business Accelerator phase, each class is broken into three parts: Instruction, Workshop and a Guest Speaker. “We are able to bring in some highly successful, well-known business people and the youth get to know them in a very personal way, and be inspired by their stories,” explains Rattan Bagga, The Idea Incubator phase turns to focus on student solutions to real world problems. Students form teams and develop a business concept. Once a concept is adopted, the team is matched with a lead mentor from the business community and one of TiE’s expert mentors. In the Venture Challenge phase, teams present their business ideas to an expert panel of established entrepreneurs. This panel chooses a winning team, which then goes on to compete in an international competition against the winners of the other TYE chapters. In the two years that TYE Vancouver teams have competed, they have won these international competitions. And this year, a team from Vancouver will have a chance to make it three for three at home, as the Vancouver chapter will be hosting this year’s international competition.

To learn more about TiE Vancouver, including how to apply for the TYE Program, visit the website at www.tyevancouver.com