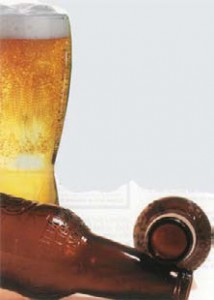 Heavy alcohol consumption may harm the developing brain, significantly impairing learning, memory and thinking in young people.Experts says a teenager’s first interaction with alcohol often happens at home and this is where they can be exposed to abusive drinking behavior. The use and abuse of alcohol by young people continues to be a great danger to them, both in the short and long-term.

In Canada, there is no federally defined legal drinking age—each province and territory sets its own limits. The legal age for purchasing, possessing, consuming and/or supplying alcohol in each province and territory is 19, but the reality is that most children will come across alcohol long before they reach the legal age, some as young as 14. It is important to help teenagers understand that they are becoming young adults and need to show that they are mature enough to handle a situation that is meant for adults. This is difficult when parents themselves do not act responsibly and accept bad actions that come with alcohol misuse.

When children enter their matric year, it’s the time of matric dances, going to nightclubs, 18th birthday parties, legal driving age, legal drinking age and the Matric Rage festival which sweeps over the county’s towns every year. There is also added pressure from friends as each one reaches the legal drinking age making this a highly unstable time in a young adult’s life.

Drinking, you choose for the worse
Drinking over the limit at a young age or any age can cause serious consequences to the environment and also the people around you and not just yourself. Alcohol can create embarrassment for you the next day or can make your life very difficult in just one night of drink abuse. An embarrassment can be an effect from drinking is getting o with someone you don’t like or didn’t want to and having to face all the pressure at school.

Why Teenagers use Alcohol
Teenagers drink for a number of reasons. It ranges from emotional problems to wanting social acceptance (to fit in with their friends). Children of alcoholics are also at a greater risk of developing drinking problems because of the parental example they follow. Teenagers may misuse alcohol for the following reasons:

Escape
Alcohol is a very powerful drug, which reduces symptoms of stress and anxiety. Because growing up is associated with feelings of frustration, social anxiety, depression and anger, teenagers offen deal with these pressures by turning to alcohol. Teens with undiagnosed and unmanaged anxiety problems are at a higher risk of abusing alcohol.

Boredom & instant friends
Some teenagers have trouble keeping themselves busy. They crave excitement and can’t handle being alone. So they use alcohol to keep themselves entertained and impress their friends. During parties, this is where the use of alcohol becomes apparent. If you are looking for an alternative to getting drunk, weed can replace alcohol at parties. Just like with anything, you need to make sure you are safe while consuming anything, especially if this is your first time.

Lack of confidence
Some teens may try to get drunk before going to a party to give them the confidence to do things that they would otherwise not do.

Rebellion
Alcohol is the drug of choice for teenagers because it frees or allows them to behave aggressively. This aggressive behavior can be a display of rebelliousness and rejection of their parents and rules.

Reduced memory: Storing and managing the information needed to carry out tasks such as reasoning and problem solving may become difficult when alcohol is misused.

Crime and violence:When teenagers drink alcohol their weakened judgement causes them to put themselves in dangerous situations more offen.

Suicide:Not only does alcohol, increase symptoms of depression in the long run, it also makes teenagers impulsive (act without thinking things through) and more likely to act on suicidal thoughts.

Sexual assault and high-risk sex: Alcohol use by the offender, victim or both, increases the likelihood of sexual assault as aggression is increased and reactive responses (behavior that’s in response to a situation) decreased. Also teenage drinking is associated with high-risk sexual behavior, increasing unplanned pregnancies and sexually transmitted infections.

What to do if your child is misusing Alcohol.
It can be scary for a parent to discover that their child is abusing alcohol. When this happens, it’s important not to overreact but you shouldn’t deny the problem either. Research shows that many teens will use alcohol once in a while. Don’t assume that your child is an alcoholic but, you need to talk to them calmly about alcohol and listen to what they have to say too. During the talk, it’s important that you:

Talk about your child’s alcohol use: How oen are they drinking, with whom, where and why?
Explain why you are concerned:Remind your teen of what is expected of them as a member of your family and the rules about alcohol use. Be sure to follow up and let them know the consequences if these rules are broken.
Encourage teenagers’ interests:You need to encourage your teen to do activities that develop their interests and skills. These activities should help teens feel good about themselves without the use of alcohol. Hobbies, school events, sport, healthy relationships and volunteer work may keep young people active and away from alcohol.

Create strong family ties: Family activities (for example; sports, movies or family getaways) along with open discussions and flexible rules can be helpful in creating strong family ties. Be a role model. If you drink, do it responsibly. If you have a drinking problem, or think you may have one, seek help. Seek professional help:If your efforts to talk to your teen and enforce the rules have failed, get professional help.

Talking to your children about alcohol is a topic that should be started by parents. While schools are there as well to provide this information, parents need to take the responsibility and act as the role models.

Poisoning Thoughts
About 10 percent of eighth graders, 18 percent of 10th graders and 24 percent of high school seniors binge on alcohol; they consume: