The Toronto Reel Asian International Film Festival invites Canadians to commemorate Asian Heritage Month this May by joining a free virtual screening of the Oscar-nominated documentary Who Killed Vincent Chin?.

Public tickets available as of May 17 at reelasian.com 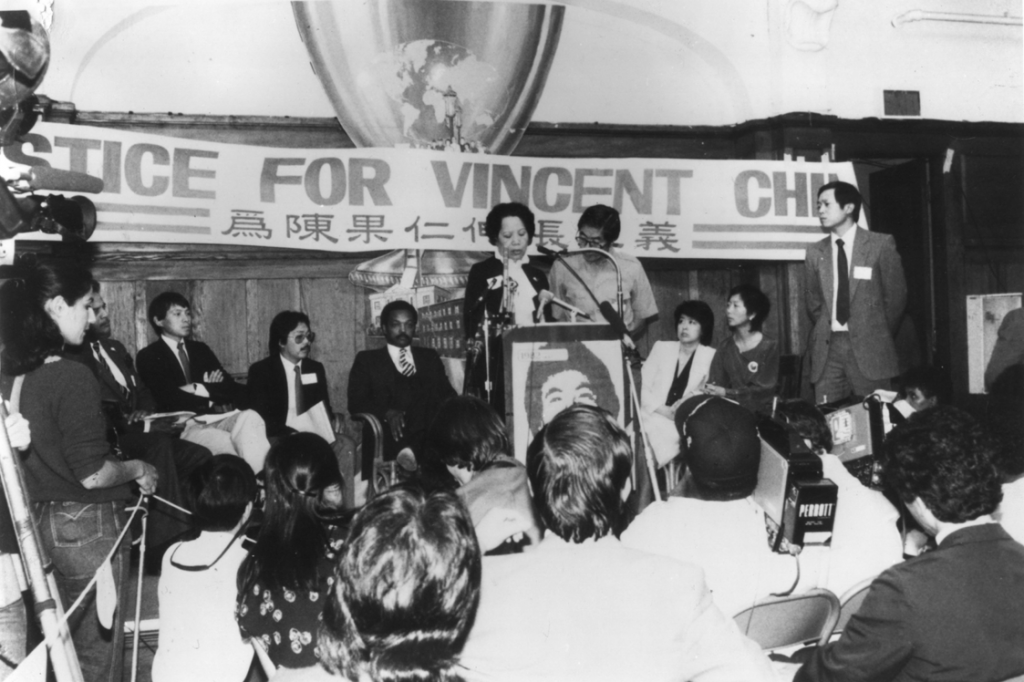 (TORONTO – May 11, 2021) The Toronto Reel Asian International Film Festival invites Canadians to commemorate Asian Heritage Month this May by joining a free virtual screening of the Oscar-nominated documentary Who Killed Vincent Chin?. The 1987 film, co-directed by Renee Tajima-Peña and Christine Choy, investigates one of the most infamous hate crimes in Asian American history. This rarely screened or streamed film is an essential part of the Asian cinematic and community history that remains all too relevant today when anti-Asian racism is surging around the world. The screening will be made available beginning on May 26 at 12:00 AM EST and viewable until May 27 at 11:59 PM EST. The film will be followed by a panel discussion with co-director Renee Tajima-Peña, Vincent Chin’s cousin and activist/educator Annie Tan, and Chinese Canadian filmmaker Yung Chang (Wuhan Wuhan, Up the Yangtze). Tickets are available here as of May 17.

Detroit 1982. Vincent Chin, a Chinese American man on the eve of his wedding, is chased down and beaten to death by Ronald Ebens and Michael Nitz. As the brutal details of the murder emerge, the question arises — was this a hate crime racially motivated by the frenzied xenophobic fears of Japanese auto imports? Co-directors Renee Tajima-Peña and Christine Choy tenaciously cover the events surrounding the murder and trial as movements build for justice while investigating and exposing white supremacy, American chauvinism, and the legal system that upholds them.

“Who Killed Vincent Chin? is a masterfully crafted film full of nuance and pointed fury that has served as a flashpoint for generations of filmmakers and activists,” said Deanna Wong, Executive Director, Reel Asian. “We see in this film the power of storytelling to document, witness and shake an audience to the core. It skilfully showcases the craft of documentary filmmaking and its integral role in bringing important issues to a larger audience. Now more than ever Vincent’s story is so important in the conversations around anti-Asian racism.”

Chin’s murder and the events surrounding it are the inspiration for the recently announced limited series in development from Amazon Studios as well as the subject of the book From a Whisper to a Rallying Cry: The Killing of Vincent Chin and the Trial that Galvanized the Asian American Movement? by Paula Yoo.

About Reel Asian
The Toronto Reel Asian International Film Festival (Reel Asian) is a unique showcase of contemporary Asian cinema and work from the Asian diaspora. As Canada’s largest pan-Asian film festival, Reel Asian® provides a public forum for Asian media artists and their work, and fuels the growing appreciation for Asian cinema in Canada. This year marks Reel Asian’s 25th anniversary edition which will take place this fall. Reel Asian will be showcasing special projects featuring prominent artists, content creators, up-and-coming filmmakers and will also include the “Reel Ideas” program for creative minds in the industry to connect online. Works presented at Reel Asian include films, videos, and presentations by East, South and Southeast Asian artists in Canada, the U.S., Asia and all over the world.