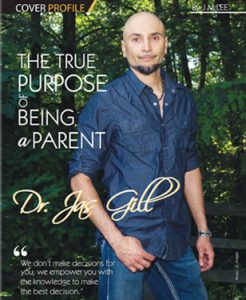 “We don’t make decisions for you; we empower you with the knowledge to make the best decision.”

Dr. Jas Gill grew up in a typical Indian immigrant family with two younger brothers. Being the oldest, he took it upon himself to accept the responsibility of taking care of his siblings. Oftentimes he baby-sat his brothers when their parents went to work. His parents were not extremely well off, but they had dreams like most Indian parents do. They wanted their son to be a doctor.

Dr. Jas, however, didn’t want to be a family doctor. He was more leaning toward either dentistry or optometry. He was always good with his hands, so dentistry seemed a good career. In his high school yearbook, he wrote next to his photo: “future dentist and part-time business tycoon.” He is, by the way, still working on the tycoon part, he joked.

High school was tough back then. Racism was pretty bad. He recalled: “One time in grade 8, I was walking down the hallway in school, when a couple of older white students walked up behind me and knocked my turban off. I was too skinny and small to do anything about it so just felt quite embarrassed. Some kids even threw me in a locker and left me there until someone felt sorry for me and let me out. During the summer months, I went berry picking with my mom. That was a tough job, especially when it rained. But, boy, did those parathas with chaa taste good.”

When Dr. Jas finally went to U.B.C., things changed. Racism was almost non-existent. He made friends right away by joining the Sikh Students Association and playing ball hockey. His high school teacher had scared him about the number of students getting kicked out of U.B.C. in their first year from poor grades. So, Dr. Jas, said: “I studied my butt off.”

In his 4th year of general science, he wanted to get into U.B.C. dentistry so bad that he taped up all his ball hockey sticks into one bundle and hid them under the stairs. He promised himself he wouldn’t play until he got accepted into dentistry. It wasn’t easy.  Anyone who knows him knew how much he loved ball hockey.

“I still remember where I was when a letter from the dentistry department arrived in the mail,” Dr. Jas reminisced. “I was driving towards the PNE on Hastings Street in my one ton flat bed truck which I drove as a summer job. I had to talk to my           dad about not opening up my mail anymore so I could be the first one to read the letter. When I came home from what seemed like an endless day, I was so nervous to open the letter. It was good news: U.B.C. dentistry had accepted me. I was one step closer to reaching my goal. I couldn’t hold back my excitement. I stuck my head out my bedroom window and yelled at the top of my lungs. My dad handed out ludoos to close family and friends,” he said, amused.

“I was the first student with a turban to make it into UBC dental school. I knew I had to study hard because I didn’t want to be the first student with a turban to be kicked out of UBC dental school. I graduated in 1997. I worked as an associate for two years. I even worked as a dentist at Mission and Matsqui prisons working on inmates.

Initially, the inmates didn’t like me because of my look, being a Sikh. Eventually, they all loved me because I took good care of their dental needs and made them laugh. The corrections officers told me later I helped reduce racism in the prison just by interacting with all the inmates.”

In 1999, Dr. Jas opened up his dental office on the second floor of the Khalsa Business Centre. He didn’t have much money, so did all the design and some of the construction himself along with his family. They did all the dry-walling, painting, and finishing the project themselves. He only had one dental chair with one staff he trained himself. When he finished with a patient, she would go to the front to collect payment while he would clean the operatory in preparation for the next patient. Around the same time he opened his office, his best friend Jaspal and him started a TV program on the Shaw Multicultural Channel called Punjabi Vibes. The show was an instant hit. Jassi and Jassa became household names in their community. He always felt the East Indian community needs good role models for the youth. Being professionals and putting themselves on television, they both became role models in their community.

Being a dentist who was very well recognized, helped grow his practice, but also put him in a situation where he had to make sure his professional reputation was well-respected. In his community, if you did something good, someone would tell ten people. But, if you did something wrong, they’d tell one hundred people. Hence, to this day, he practices conservative dentistry. He only provides treatment that patients need, and he knows he can do well. He has a logo that one can see as soon as one walks into his office: “We don’t make decisions for you; we empower you with the knowledge to make the best decision.”

“I know a lot of wealthy people in our community who have very poor reputations,” Dr. Jas emphasized. “I would rather have less money but a good reputation. I would not consider myself your typical dentist. This summer, my female pit bull had 15 puppies, last summer she had 11. You could only imagine what my house became after that. My wife and I had to get up every two hours to switch the pups to the mother so each would get enough milk to survive. At two weeks, we started to supplement mother’s milk by bottle feeding the pups that took about an hour and a half to feed all the little puff balls.”

Why would a dentist do this? For the love of animals and to teach his children a lesson on life and death. Two of the pups died, but thirteen survived.

“If  someone were to ask me what my greatest achievement is, I would tell them it’s being a father to my two boys. I coach their soccer in the summer and their ball hockey in the winter. I have seen many professionals who can earn a lot of money and, therefore, spend more time making money while letting other people teach and coach their kids. I taught my boys to swim, kick a soccer ball, take a slap shot, catch a football, and throw a punch. I wish more parents would realize that the true investment which has the highest returns is the quality time you spend with your children.”