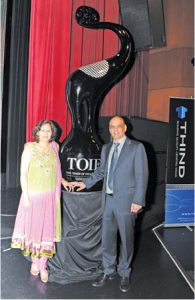 Thind’s range of real estate development has been a major catalyst in housing within the Lower Mainland – unlocking the ability to build faster and more efficiently. In turn, his company has helped to provide hundreds of homes for families. Growth has been wild. From afar, one does not know how to comprehend Thind’s success, but once you meet him, it’s hard not to root for him. Naturally inquisitive, genuinely nice and humble, Thind is not one to broadcast his achievements. That makes him an even more likable guy.

“Face your fears. Risk failure. Struggle. Perserve.” These words and phrases relegate one to the iconic framed posters in the 1980’s and 1990’s of soaring eagles, rowing teams or lonely mountain peaks, each captioned with mighty concepts and followed by a compelling quote.

“Man cannot discover new oceans unless he has the courage to lose sight of the shore.” Profound, right? Yes. They were meant to inspire the millions of people lingering in break rooms, or staring at the wall behind the boss’s desk.

For Daljit Thind, these words have become his modus operandi. They have proved to be successful in helping build his mammoth real estate empire – THIND Properties – that includes creating custom homes and condominiums for families in Vancouver and the Lower Mainland.

He credits his real estate success to working extremely hard Thind offers no shortcuts or detailed directions. Thind’s range of real estate development has been a major catalyst in housing within the Lower Mainland – unlocking the ability to build faster and more efficiently. In turn, his company has helped to provide hundreds of homes for families. Growth has been wild.

So how did he get where he is today? Let’s Find out. Thind was born and raised in the village of Rachian, Ludhiana in India. A book smart person, he graduated with a Bachelor of Science from Rohtak University and wanted to one day pursue the field of pharmacy. Instead, marriage and immigrating to Canada in 1992 halted that goal. With the economy in a slow cycle and his need to pay the bills, he took on any odd job. These jobs ranged from framing, painting and everything in between, but kept circling back to real estate. From a reflective perspective, the seed was planted, but the true form and scope of his real estate development remained elusive for a few years. In the meantime, Thind carried on working anywhere and everywhere. 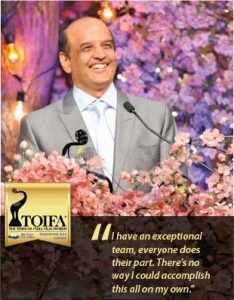 “Seeing potential in something that no one else sees—that’s a ton of fun,” said Thind. In 1996, when he purchased a parcel of land in Surrey, he was seeing something in the midst of the cautionary tale for any entrepreneur: Thind was one of the First to develop in Surrey – he completed the project in six months, but lost over $20,000. Being first sometimes means being crushed. In battling to carve out a bit success, an individual is naïve at first – and makes mistakes. However, those are the situations where lessons reveal themselves, a person determines their character, and learns to play in an ever-expanding narrow bandwidth of risk.

Despite making a myriad of gaffes, Thind caught the proverbial entrepreneurial bug of creating something. Thind forged ahead and in 1997, he purchased an older home in Burnaby. He tore down the existing structure, built a home, lost zero money and finished the project in two and a half months. Still, the big kahuna – the eureka moment, the one that captured lightning in a bottle—was not realized. Thind forged on, steadily multiplying the number of houses he was building.

His real estate developing finally achieved critical mass from 1998 to 2002 when he built over 100 houses and started real estate development in the arena of condominiums. Some may have stopped in their tracks at this point. Instead, things did not slow down – the next decade flew by with THIND Properties condominium projects and homes cropping up in every area of the Lower Mainland. Thind and his company went from a small fish in a big pond, to gargantuan fish in an evershrinking pond. His latest project is in the Metrotown area, a high skyrise on Kingsway that has 200 units.

From afar, one does not know how to comprehend Thind’s success, but once you meet him, it’s hard not to root for him. Naturally inquisitive, genuinely nice and humble, Thind is not one to broadcast his achievements. That makes him an even more likable guy. “I have an exceptional team, everyone does their part. There’s no way I could accomplish this all on my own.” When he talks about his family, which includes his wife, Harinder and their three children – Paul, Priya, and Gary, he smiles, beaming with happiness. “All three of my children are still young. The two eldest (who are twins) will be entering University soon, and studying business. They want to be a part of the business…in some way,” said Thind.

Exemplifying the fact that whatever greatness Thind has achieved in entrepreneurship and family, he still makes time for three charitable organizations that focus on local initiatives, the environment and educating girls, respectively. Within the local charitable scene, Thind and THIND Properties has been working with Progressive Intercultural Community Services Society (PICS) on programs and services that assist new immigrants, seniors, farm workers, women and youth. “For me it is important to give back. In India, we work with Gurdwara Ram Nivas in the Village Dodher, District Moga. Sant Ram Singh Sidhu started the charity and every year we plant one million trees.” Thind’s third charitable ties emphasize educating women and girls in a geographic area where poverty and backward thinking is prevalent – female education is not considered. The organization SBRS College for Women & Girls helps with commuting girls from 250 villages directly to and from school. The colleges are located in in Ghuduwala Village in Saridkot District and SBRS Gurukul located in Moga District and the goal is to help girls and women receive an education. Thind and SBRS also take things one step further and help families pay for their daughters’ weddings.

His determination to be original is evident even in seemingly minor aspects of his business life. Combined with his relentless focus, Thind’s ability to adapt and to see new opportunities has kept him and his business relevant. Earlier this year, Thind and THIND Properties was a partner and supporter of the TOIFA Awards – Times of India Film Awards 2013. “THIND Properties is a company that prides itself on its community involvement, particularly within the South Asian community here in British Columbia. My family and I watch Bollywood movies all the time, we were incredibly proud to be a partner and supporter of TOIFA,” says Thind.

“TOIFA was a once in lifetime experience for many people here in Vancouver and across British Columbia, and it was amazing to be able to help bring this event to life for the thousands of people who had the opportunity to enjoy it. My wife and children loved attending the festivities. I have to admit that having a conversation with Abhishek Bachchan and Shahrukh Khan, among many other actors – was wonderful.”

So what is the connection between Bollywood and Thind? Other than being a Bollywood fan, it wasn’t just mere coincidence that the local real estate mogul stepped up to being a TOIFA partner. Thind is commencing real estate development in India and wait for it – he will be producing Bollywood/Punjabi movies in India and British Columbia. Thind may have been motivated, at least in part, by his love of India and Bollywood, a growing interest in cultural affairs, or perhaps to help enable his own children to have stronger ties with India.

India is front and centre for Thind. Our interview for this article was conducted while Thind waited to board his flight to India, where he would jet set locations and start preliminary work on both movies and real estate. While we talked about plans, behind the apprehension to reveal his full-scale plan, the excitement in his voice was obvious. It was definitely a restless quest to make an ever-bigger splash. “Now I truly feel like I’m on a new adventure. The minute I can do anything well, I’m thinking, OK, I got that down. Now what else can I do?” Thind says, laughing. “And the only way I’m going to find out is to keep trying, working hard, and waiting for the outcome.”

What he’s learned in real estate will help Thind in producing movies. Under a cloak of niceness, Thind is hyper organized and fiercely competitive. He’s learned perseverance, breaking through rejection and going back for another swing at the ball as quickly as possible. He runs a tight ship and has an incredibly strong work ethic. These values impart an ‘I should try a little harder, too,’ frame of mind to anyone who is around him, just like the office framed posters of the 1980’s and 1990’s.