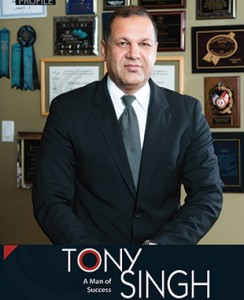 There are many aspects to the character of Tony Singh, owner and founder of one the most successful local grocery chains in the Lower Mainland. He not only brings passion to Fruiticana – the business he has developed and nurtured for nearly 20 years, but he brings the same kind of passion to his family life and to his many charitable endeavors. DRISTHI is privileged to present to its readers a profile of Tony Singh – the Businessman, the Family Man, and the Philanthropist.

It was back in 1994 when Tony Singh first opened up the first Fruiticana store in Surrey. Initially he had come to the Lower Mainland from Montreal for a visit with relatives, but when he arrived he noticed he couldn’t find many of the key groceries and ingredients needed to prepare a traditional Indian meal. He realized that while there was a large South Asian population in Surrey, there really was no store that catered to their needs around the foods they preferred to eat. So he moved his family to the Lower Mainland and opened up what would become a highly successful grocery chain. “It was a struggle, at the beginning,” Tony recalls. “I had to deal with the larger chains, who didn’t want me around.”

It was definitely not planned this way. In fact, Tony had plans to become a pilot, which he achieved but did not pursue, instead taking some business courses, though he did not initially have a plan of how to translate that education into a career. “Coming into business was not necessarily planned, it just happened when I moved to Vancouver” Tony advises.

Tony had worked at a grocery store while going to school, so had some basic understanding of that type of business, but nothing prepared him for what lay ahead in that first year. But he also had something that cannot be taught in a business class – instincts, confidence and the willingness to take risks. With most businesses, location can mean everything – and Tony saw that there was a large – yet unserved – South Asian population in Newton. “I took the product to where people live, rather than expect them to travel elsewhere.” The same principles – of going where the population is – applies today. “Whenever we are looking at opening a new store, we look at where the population is, and where it is moving to.”

Tony would visit other stores, and research what kinds of products they offered – and perhaps more importantly, what they lacked. He then contacted friends and businesses in Montreal, and began having supplies imported from there. “So the products were initially coming from Montreal, and I did that for a while, and slowly I made more connections, and now I have products coming from California, Mexico, India, and from all around the world.” While Tony no longer has to rely on the phone book, he knows that the South Asian community has diverse tastes, and that means there is still great need in being in constant dialogue with suppliers. “Our tastes are different. For example, you go to most supermarkets and they have a certain kind of mango – many South Asians don’t like those kinds of green mangos. They want ones that are the full colour – red and yellow – very sweet – and that’s what we give them. The farmers would not know this if we did not tell them this.” In order to achieve that, Tony had to go to Mexico and teach the farmers what kinds of mangos were the right colour and sweetness – the kind you cannot find at any other stores.

Now, about 19 years after the first store opened, Fruiticana is one of the most recognized produce and grocery chains in the Lower Mainland. No longer is it solely a family operation (that very first store was operated by Tony, his father Tarlok and one other employee), today Fruiticana’s workforce numbers more than 500 employees. And the one Surrey store has now expanded to 18 stores, located both here in British Columbia as well as in Alberta. The grocery chain continues to grow at an amazing yet carefully managed rate, with one new store on average opening each year. Annual sales are now in excess of $100 million.

Clearly, Tony’s story can serve as an inspiration to anyone who aspires to be successful as a business person. However, there is much more to Tony Singh than just being a highly successful entrepreneur. After all, the message of developing a strong vision, working hard and persevering is one that resonates for anyone who looks to be both successful in their career as well as in their life. And Tony has been successful in both.

Tony is a devoted family man, who despite having a busy work schedule (often entailing 12 hour-plus days) has always prioritized the needs of his family. Many of his perspectives on family come from his own upbringing. Born in Jallandar, India, he immigrated as a 10-year old child to Toronto in 1975 with his family, and then within a year moved to Montreal, where the economy was booming. He remembers Toronto being a difficult place for a child of colour, recalling instances of racism “where people would call you names right to your face,” though has only fond memories of Montreal. “I was the only brown kid in school, and nobody called me names.”  It was in Montreal where many of his formative years were spent. He went to school in Montreal, and it is where he met his wife and got married.

When Tony moved to the Lower Mainland to open up the first Fruiticana, he knew he needed to surround himself with people he trusted and could rely on – family. “When things began to pick up, after about six months of opening that first store, I called my brother and asked if he wanted to become involved, and so he moved his family here too.”

“My brother and I put in a lot of hard work – along with my wife, who was a dental hygienist. After finishing her work, she would come and help me out. And my dad, who was retired at the time, would help out, and put in long hours alongside us.” Tony also developed close relationships to many of his employees during those early years, and many remain with the company to date. He considers many of his employees as members of his extended family.

Eventually the hard work during those early years paid off, and Tony eventually was able to pull back from day-to-day operations and actually take some time off on occasion to enjoy time with his family.

“When I have free time, I am involved in some kind of community based-activity or I spend a lot of time with my children,” Tony explains. He has a 17-year old daughter, a 14-year old son and 12-year old daughter. The pride is evident in his voice as he talks about his children. Like many parents, he and his wife are often “taxi drivers,” taking the kids to various sports practices and extra-curricular activities they are part of. He often involves them in the community-based charitable work he is part of. Tony wants to ensure that they are raised to appreciate the community they are part of, and that they will work hard to strengthen it.

Tony is involved in numerous social causes. “I try to give or put my time to causes where I believe there is great need. I want to make a difference, and look for ways to I can put a smile on someone’s face.” He credits his grandfather for instilling within him a sense of community and caring. “On occasion, he used to invite the poor in the village to come together, and then he would feed them.” Those values were passed down to Tony’s father, and then down to Tony. And, in turn, he has passed those values on to his children.

Tony is one of the founding members of the SPARK Foundation, which is a non-profit organization that assist students in obtaining a university education – students who, due to financial or other reasons, would not be able to pursue post-secondary education. Tony also assisted in the fundraising efforts to build the new emergency wing at Surrey Memorial Hospital and he also donates time and money to a variety of important causes – such as fundraising for Children’s Hospital and cancer agencies.

“I think everyone can give back. It doesn’t matter how much. If you only make one hundred dollars, you can give one or two dollars. It may be a drop in the ocean, but an ocean can be made one drop at a time. If you make more, then you can afford to give more.”

While Tony is happy to donate his time and money, like with everything else, he does his homework. He wants to know where his time and money is going to. “If people are raising funds, but most of the money is going towards costs and not directly to the cause, then I want to know that.” So he looks for the good causes, the ones that are transparent and accountable – and effective – in the work they do.

When asked for any advice he can give to others, he feels there is no “secret” or magic formula for success. He feels that ultimately, one must “work hard, believe in yourself, and of course, do your homework. See what you want to do, look around and see where you can do it. Have the courage, believe in yourself and work towards your goals. Learn from your mistakes, but don’t let that stop you.”