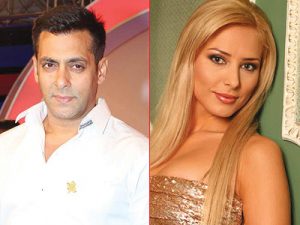 Much has been talked and written about Salman Khan and his rumored ladylove Luia Ventur and the latest about the duo is that Luis will star in Salman Khan’s film, ‘O’Teri’ to be directed by Salman’s brother-in-law and producer Atul Agnihotri.

Salman has launched many new faces in Bollywood like Sneha Ullal, Daisy Shah, Sana Khan, Sonakshi Sinha and there are few more names and now the latest he is going to launch is Lulia Vantur, his rumored girlfriend. Lulia, a Romanian model and TV presenter was seen with Salman Khan in various events, she even accompanied Salman to ‘Jai Ho’ shoot in various locations.

Lulia will shake her legs in an item song in ‘O’Teri’ and she will even lend her voice with Mika. Salman Khan Lulia’s relationship occupied the gossip broke-up. Through the exact reason of their break-up is not known, Salman Khan’s parents seemed to be not too impressed with the Romanian beauty. Lulia was not the choice of both Salim Kahn and Salma Khan. Salman met Lulia in one of his visits to Romania. They first became friends and the gradually turned lovers. Lulia was spotted in India with Salman numerous times. Lulia spent considerable amount of time with Salman in ‘Jai Ho’ shoot in India.