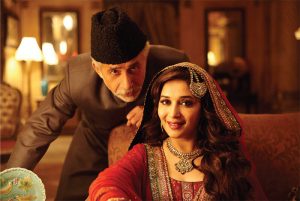 Rare is a Bollywood release that one genuinely looks forward to. Dedh Ishqiya, for sure, is one such atypical film, and certainly not for its capricious title alone.

On account of several other worthy reasons, not the least of which is the presence in the cast of the still-incandescent Madhuri Dixit, it has got to be one of this year’s most anticipated releases. Dedh Ishqiya measures up on most counts. Co-writer and director Abhishek Chaubey delivers a delightfully droll thriller set in an upcountry feudal milieu where adorable rogues and unfettered tricksters have a field day. In fact, Dedh Ishqiya is in many respects appreciably more enthralling than Ishqiya. Thematically, the follow-up casts its net far wider and comes up with striking insights into the flaws and foibles of people who haven’t lost their flair for the flashy despite their lives having hitting the skids. The screenplay is laced with acidic wit, the comic touches are subtly sly, and the on-screen performances are marvellously modulated.. Dedh Ishqiya is a sequel to the acclaimed and successful Ishqiya with their romantic adventures. And this time love will take them through the SEVEN STAGES OF LOVE… with the beautiful and dangerous Madhuri Dixit as Begum Para and Huma Qureshi as Munniya. If it is difficult to take one’s eyes off the screen when Madhuri is on it, it is no less a joy to watch Huma Qureshi effortlessly matching strides with the veteran, move for move. Naseeruddin Shah captures the essence of the worldly wise Khalujaan with the kind of acuity that only an actor of his proven calibre could have. Arshad Warsi, as always, is a livewire who injects full-on fizz into the proceedings without breaking into a sweat.  This movie deserves to be seen by all, specially who enjoys classic, musharya-urdu dialogue bazzi. Its a great film. A must watch movie. A “Dhai” (two and a half) is more than welcome – and sooner, rather than later.