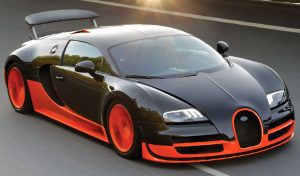 With a 252-mph top speed that makes it the fastest production car in the world and a 1,001 horsepower engine, the Bugatti Veyron 16.4 is the world’s most powerful production sports car. And with a price tag of about $1.7 million, it is also the world’s most expensive new car

First introduced in the 2006 model year, the current Bugatti Veyron 16.4 is still an exotic sports car, with its use of high technology materials and engineering.

Exclusively and meticulously hand- built and tailored to individual fabulously well-heeled customers, it is a car few have seen or will ever experience outside the playgrounds of rich Arab oil sheikhs, billionaire corporate owners and the independently very wealthy.

Volkswagen who own Bugatti actually lose millions of dollars on each Veyron made as the development costs for the car  were so high – However the aim was to build the fastest production car in the world regardless of cost and to that aim they have succeeded.

Power is sent to all four wheels through an F1-style, seven-speed automated manual gearbox.   the Veyron is so fast, it needs runways to achieve top speed as it runs out of road due to its tremendous acceleration.  It is reputed that the Veyron has a 0-60-mph time of approximately 2.5 seconds and a quarter-mile time in the low 10-second range- which is as fast as some 2000 horsepower dragsters. The top speed is estimated at 252 mph.

The facts behind the Veyron are as amazing as the cars looks: For example the Veyron has 11 radiators and 64 valves for its engine.  It needs fuel with a 93 octane or higher to run properly, or your must have the engine detuned by Bugatti or risk damaging it.  Note, the four specially – made Michelin PAX Pilot tires are rated at a top speed of 253 mph and cost $6,500 each and have to be changed in France at the Bugatti specialist service center.  Speaking of the tires, at 250 mph, the Veyron’s tires will last only fifteen minutes. Fuel economy? Well at top speed, its 26.4-gallon fuel tank will empty in only twelve minutes!

The front windows automatically rise and lock in place at 93 mph for safety and you have to take the rear body panels off to access the engine!  Meanwhile the huge rear aerodynamic spoiler is operated by the same hydraulic rams as found on military aircraft.

The Veyron is unconventional in many other ways, for example it has three driver selectable ride heights, but  the carbon fibre seats have no driver adjustable height settings – you have to get it done at the dealership who have to take them out…at considerable cost.

The gear shifter has a complicated shift pattern designed to protect the Veyron’s transmission that costs $123,200 to replace!  The engine alone is over $250,000.

So far 240 Veyron’s have been sold out of a projected 300 production run and it will cost around $100,000 just for airfreight delivery from France- this is not a car that arrives via ship in the thousands like a Hyundai.  Oh! and by the way, a US Bugatti dealer will need a $432,000 deposit if you want to buy one.

Test drives for the Veyron are few and far between for auto Journalists. Just a few high profile lucky writers for top magazines have been lucky enough to drive one and very few have driven it over 150 mph. It is not a car loaned out by the day or week to auto journalist like myself to do as they please!

However, I have spoken to one lucky auto Journalist who managed to get some seat time in a Veyron in France and he spoke of it in hushed tones, saying, “16 cylinders behind you screaming away at over 200 mph with a test driver, it is just mind-blowing and even just standing in front of the car is like being in the presence of an alien space craft.”

He added, “The interior is surprisingly roomy and there is a lot of carbon fibre, metal trim and leather, once you accelerate, the engine is so loud and it’s a bumpy, rump shattering ride.”  The Journalist continued dreamily,” The acceleration is just neck snapping, everything just blurs outside the windows…just out of this world that’s the only way to describe the Veyron.”